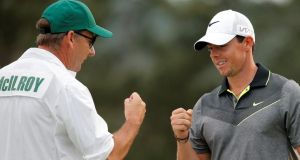 Rory McIlroy has sacked his long-time caddie JP Fitzgerald, according to Reuters, ending a partnership that took the Northern Irishman to four Major titles and the top of the world rankings.

McIlroy will have a new caddie on his bag at the World Golf Championships Bridgestone Invitational this week after ending his nine-year relationship with his fellow Irishman, the source, who did not want to be named, said.

There was no immediate response from McIlroy’s management to an e-mailed request for comment late on Sunday.

Fitzgerald’s sacking, which McIlroy is expected to confirm on his arrival at Firestone Country Club in Akron, Ohio, comes barely a week after he publicly thanked his bagman for jolting him into gear when he made a poor start to the British Open.

McIlroy, who won his last Major at the 2014 US PGA Championship, employed Fitzgerald in 2008 shortly after turning professional.

The pair enjoyed a brilliantly successful partnership as McIlroy took over from Tiger Woods as the game’s dominant force and became world number one.

“He has taken me from 200 in the world to Major champion,” McIlroy said of Fitzgerald in 2011.

At the British Open at Royal Birkdale earlier this month, McIlroy again heaped praise on Fitzgerald, who delivered some blunt words to his boss after the Northern Irishman started the tournament with a string of bogeys.

After fighting back to shoot one-over 71 in the first round, McIlroy told reporters that Fitzgerald had done a “great job”.

It now looks like the British Open was Fitzgerald’s swan song with McIlroy, who flirted with contention in the final round before finishing equal fourth.

Forbes estimated that Fitzgerald earned $1.65 million from his cut of McIlroy’s prize money over the 12 months to June this year.