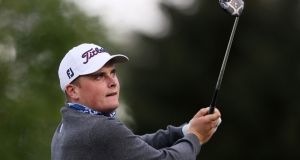 The young buck and the old dog for the hard road, as James Sugrue – all set to start out on professional life once he gets the little matter of the Masters out of the way in November – and Damien McGrane, very much settled into life away from tour as club professional at Carlow Golf Club, led the home challenge after the first round of the DDF Irish Open.

As if to demonstrate a week is not only a long time in politics, Sugrue – last year’s British Amateur champion who wasn’t even in the tournament a week ago, but got a late invitation after some nudging to those who dispense such things from Lee Westwood – contrived to produce a fine three-under-par 67 that proved to be the best of the 11 Irish players in the field.

Sugrue was one of those who departed the US Open at Winged Foot somewhat battered and bruised, but one good thing that came out of it was dialogue with Westwood when they played the first two rounds together. It started innocently with Sugrue wondering if Westwood was playing at Galgorm Castle. Westwood told him he wasn’t, and assumed Sugrue was. Sugrue told him he wasn’t. Westwood then took it on himself to go very public in wondering why Sugrue hadn’t got an invite. Hey presto, one appeared.

And Sugrue, ranked eighth in the world amateur rankings, certainly made the most of Westwood’s intervention with a round that featured five birdies and two bogeys to lie in a share of fifth place after the opening day’s play.

The strength of his game came with driver in hand, a contrast to how he fared in Winged Foot. “Last week I kind of struggled off the tee. I’ve always had a nice shot with my driver in my locker, a kind of 80-per-center that’s pretty low and straight most of the time but last week it didn’t just didn’t suit the course, you had to hit it high . . . whereas, out here, it almost benefits when you hit it low because you can keep it under the trees and stay out of the wind,” said the 23-year-old Corkman.

Sugrue didn’t need to be reminded that a certain Shane Lowry won the Irish Open as an amateur. “The European Tour put up a lovely video of Shane’s win last night. It was brilliant. I was just talking to my caddie [Conor Dowling] about it when we were heading back in the car. It was some achievement to win as an amateur,” said Sugrue who added of his own quest: “If I can enjoy myself and not think too much into it, good golf usually follows close behind.”

For McGrane, the 49-year-old former winner of the China Open who retired from tour life in 2015, his solid round of 70 was typical of the old days: “It actually brought me back to what I used to be good at doing when I was out here full-time, grinding out a score on a tough day,” he conceded.