Phil Mickelson battling his swing as US Open looms 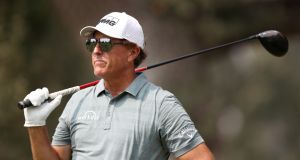 Phil Mickelson watches his tee shot on the 16th hole during round three of the Safeway Open at Silverado Resort in Napa, California. Photo: Jed Jacobsohn/Getty Images

There is no right or wrong way to prepare for a Major, whether to play the week before or not. Take Big Phil and Tiger. While Mickelson chose to fine-tune at the Safeway Open (an undistinguished tied-44th finish), Woods opted to make an early visit to Winged Foot in New York, the venue for this week’s US Open, where he got a close-up, first-hand view of the heavy rough that is notoriously part of the set-up at the old design.

As it happened, an issue with his driving was the primary takeaway for Mickelson from the Safeway as he made the coast-to-coast flight from California to New York where his quest to finally get the one leg of the Grand Slam that has eluded him throughout his career reaches into a 29th attempt, his 27th as a professional. Indeed, Lefty has no fewer than six runner-up finishes, among them at Winged Foot in 2006 .

Mickelson’s return, 14 years on, is with a little more trepidation. To negotiate a route from tee to green, all the while controlling the ball, is a prerequisite for anyone with winning ambitions at Winged Foot and Mickelson conceded after finishing up at Silverado on Sunday evening that a left miss had crept into his long game.

As he put it: “the last couple of months I’ve been missing it more to the right and not worried about the left and the left crept in again. For years I missed it left. I haven’t been fearing that at all lately, but I missed it left (at the Safeway) which is not good. I can deal with missing it right but not left.”

If that sounds like a major concern for Mickelson heading into the rescheduled US Open (originally due to take place in June but, like so much in sport, put on the back boiler due to the coronavirus pandemic) the news on other aspects of his game, regardless of a recent win in his debut on the Champions Tour (for over 50s), doesn’t sound too healthy either.

“I’ve got some things to work on, but it’s not far off. I’ve got to drive the ball well. My short game needs to get sharp. Putting needs to get sharper on faster greens. Lag putting, that’s going to be a big key (at Winged Foot). All those things,” said Mickelson, more aware than anyone that the clock is ticking towards Thursday’s first round start.

He added: “It’s not a complete mess, but I’m not striking it the way I’ve been striking it the last few months. It’s not far off, but it’s got to click in the next few days . . . I’ve won a Major winning the week before, I’ve won a Major missing the cut the week before. You just don’t know how it’s going to be. Right now, I’m kind of in between. I’ve got a little bit of work to do, but it doesn’t feel that far off. I actually have had some nice breakthroughs in the last year and I feel like I’m on the precipice of playing really well.”

While Mickelson opted to play in California and aim to sort out those issues with a card in his hand, Shane Lowry – of the four Irish players in the US Open field – was the only one to take in the tournament in Napa Valley. However, a missed cut was hardly what he wanted and Lowry tees up in New York (before heading home for next week’s DDF Irish Open at Galgorm Castle) aware that it will be last tournament for a while stateside.

Rory McIlroy, Graeme McDowell and James Sugrue, winner of last year’s British Amateur, are the other three Irishmen in the field at Winged Foot.

McIlroy had to wait until the limited field Tour Championship to secure his only top-10 finish of the PGA Tour’s resumption following the Covid-19 shutdown and is yet to fire on all cylinders, while McDowell missed the cut in his last three tournaments and hasn’t competed since the Northern Trust last month. McIlroy played the back nine in practice on Monday, while Sugrue was the second player off the first tee, taking in 18 holes.

Pep Guardiola rules out any more summer signings for Man City 11:53
Racing 92 players test positive for Covid-19 two weeks before Champions Cup final 11:45
Aidan O’Brien’s Love withdrawn from Arc due to the ground 11:21
Gareth Bale to miss Wales’ Nations League clash with Ireland 09:41
A big night awaits Dundalk with €4m on the line, Man United see off Brighton 07:50
Here is your handy guide to sport on television this week