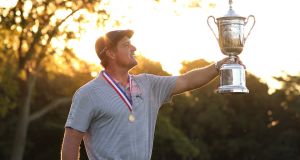 The Green Jackets cannot say they have not been warned. With seven weeks to go until the US Masters begins under towering Georgia pines, Bryson DeChambeau has promised to mirror - or enhance - the approach that delivered US Open glory on Sunday.

DeChambeau is not the sport’s most popular figure but, for now, he is easily its most significant. Should the Californian’s style of blast and gouge prevail at the Masters in November then we really would be in the midst of a revolution. “Length is going to be a big advantage there,” the new US Open champion said. “I know that for a fact. It’s always an advantage pretty much anywhere but I’m going to try and prepare by testing a couple things with the driver.”

Specifically, DeChambeau’s latest experiment involves one that is 48 inches in length. This would be the typical tool of long-drive exhibitionists, not Tour professionals. “I’m not going to stop,” he said. “We’re going to be messing with some head designs and do some amazing things to make it feasible to hit these drives maybe 360, 370. Maybe even farther.”

DeChambeau’s Augusta assessment is overly simplistic but he is fully entitled to be bullish. A diet involving steak, potatoes and chocolate milk has elevated his game into fresh territory. All, it must be said, against sniping and criticism from elsewhere. The 27-year-old’s focus on raw numbers and science contrasts markedly with the widespread belief that golf should be a sport of feel, whereby natural artists rise to the top. One of them, Rory McIlroy, looked slightly uneasy at the comprehensive nature of DeChambeau’s win at Winged Foot. He was the only player under par and won by six shots.

“I don’t really know what to say because that’s just the complete opposite of what you think a US Open champion does,” said McIlroy. “Look, he’s found a way to do it. Whether that’s good or bad for the game, I don’t know, but it’s not the way I saw the course being played or this tournament being played.

“It’s hard to really wrap my head around it. I’m not saying that’s right or wrong. He’s just taking advantage of what we have right now.”

There is a counter-point to McIlroy’s. It is unfair to depict Dustin Johnson, Brooks Koepka and Gary Woodland as flat-track bullies but, since Jordan Spieth won the US Open of 2015, champions have been able to overpower venues. DeChambeau was a fine player - the US amateur champion and a multiple winner on the PGA Tour - before he used lockdown to overhaul his body.

Now, he seems comfortable in the role of trend-setter. It should be recognised that an emerging Tiger Woods hit the ball further than everybody else and not always accurately. Jack Nicklaus broke similar barriers decades earlier. DeChambeau cannot be classed anywhere near that duo’s professional category but his plan has not suddenly arrived in isolation.

“I’m definitely changing the way people think about the game,” he said. “Now, whether you can do it, that’s a whole different situation. There’s a lot of people that are going to be hitting it far. Matthew Wolff [the runner-up]was hitting it plenty far, a couple of putts just didn’t go in for him and that kept the momentum on my side.

“There’s a lot of young guns that are unbelievable players. The next generation that’s coming up hopefully will see this and go, ‘Hey I can do that, too.’

“My goal in playing this game is to try and figure it out. I’m just trying to figure out this very complex, multivariable game and multidimensional game. It’s very, very difficult. It’s a fun journey for me. I hope that inspires people to say: ‘Hey, look, maybe there is a different way to do it.’ Not everybody has to do it my way. I’m just saying in general that there are different ways to do things.”

DeChambeau gives his body weight as typically between 230 and 235 pounds. By the time he reaches Augusta, he hopes that can grow to 245. As the rule-makers ponder how to limit driving distances that could, in theory, render the oldest courses obsolete, DeChambeau will continue on his path.

“I am talking to a doctor,” he said. “I got all my blood sample tests, everything back a couple weeks ago. Everything is fine. We’re going to keep monitoring it and making sure I’m as healthy as possible because I do want to live for a long time.

“It’s tough to rein in athleticism. We’re always going to be trying to get fitter, stronger, more athletic. Tiger inspired this whole generation to do this and we’re going to keep going after it. Will they rein it back? I’m sure. I’m sure something might happen. But I don’t know what it will be. I just know that length is always going to be an advantage.”

The Masters cannot arrive soon enough for DeChambeau. Or indeed, those of us fascinated by how far this project can carry him. - Guardian