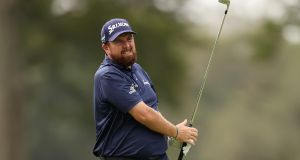 Shane Lowry will be the headline name in the field for this week’s Irish Open. Photograph: Gregory Shamus/Getty

Shane Lowry may not cast himself as a saviour by any means, yet his presence in the field for this week’s Dubai Duty Free Irish Open provides an X-Factor that otherwise would have been missing; while relegated from its Rolex Series status on the PGA European Tour for this staging, and with a reduced purse down from €6 million last year to €1.25 million, Lowry has effectively gone out of his way to play, providing a headline act of stature.

Indeed, Galgorm Castle - the resort outside Ballymena in Co Antrim - can also be credited with providing something of a rescue act in terms of ensuring that the Irish Open’s long, continuous presence on the European Tour (dating back to its revival in 1975) is preserved, after the impact of the coronavirus mean the original time and place, in May at Mount Juliet, was a casualty of the pandemic.

The tournament will be unlike any other in its history, being played behind-closed-doors with no spectators in line with the European Tour’s policy since its resumption. As far as the field is concerned, its strength is not as deep as in recent years when Rory McIlroy’s initial hosting brought in some favours, while its Rolex Series status and large prize purse guaranteed some of the biggest names in the sport.

Where it offered 46 world ranking points to the winner in 2016, 48 in 2017, 38 in 2018 and 44 a year ago at Lahinch, this year’s winner will receive 24 points. In truth, that comparison is probably an unfair one in that it is an achievement for the tournament to be going ahead at all and, while McIlroy and Graeme McDowell and defending champion Jon Rahm are on the absentee list, there is a true international flavour and all eight winners of the Northern Ireland Open (a Challenge Tour event held on the same course) are entered.

Among the past champions competing on the parkland layout include Michael Campbell and Soren Kjeldsen along with of course Lowry and Pádraig Harrington. In fact, there are 26 players in the field who have won an event on the European Tour either last season or this, many of them young up-and-coming players with big futures ahead. While Lowry is not alone in making the onward trip from the US Open at Winged Foot to Ballymena, with Ryan Fox, Connor Syme, Jazz Janewattananond and Justin Harding also making the transatlantic journey.

With the field reduced to 144 because of the available light at this time of the year, there are 11 Irish players in the field: Lowry, Harrington, Cormac Sharvin, Jonny Caldwell, Paul Dunne, Gavin Moynihan, Colm Moriarty, Damien McGrane and amateurs Mark Power, Tom McKibbin and James Sugrue. Harrington hasn’t played a tournament since the Arnold Palmer Invitational at Bay Hill back in March.

Lowry’s stint stateside extended to an unplanned seven months, due to the impact of Covid-19. The connection with the Irish Open, as his national championship and one he won as an amateur in 2009 to provide a dramatic stepping stone into professional golf, ensured Lowry - despite a busy schedule in recent months - made it to Galgorm Castle and the absence of a pro-am will probably prove beneficial in that it means he can play whatever number of practice holes as he wishes while placing some pre-tournament rest as an important part of his preparations.

McDowell, meanwhile, has remained on the PGA Tour this week rather than making a one-off journey home. Originally due to play hosting duties at the Irish Open until its reshuffling in the revised schedule, McDowell has opted to defend his title in the Corales tournament in the Dominican Republic which also starts on Thursday. Séamus Power is also included in the field for that PGA Tour event.