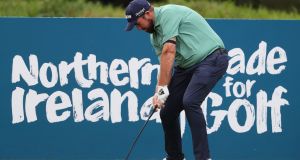 Shane Lowry uses a child’s club on the 7th tee during a practice round at Galgorm Castle Golf Club in Ballymena on Wednesday. Photograph: Brian Lawless/PA Wire

As if to serve as a reminder of past glories, the entrance road to Galgorm Castle is lined with large images of players who have won the Irish Open. Of players punching the air, or waving a cap, or holding the trophy. Shane Lowry might have caught sight of himself along the way, trophy in hand, as he arrived as the headline act for this latest edition of the tournament, but one unlike any other.

With no spectators as it is played behind closed doors and a reduced field – down to 144 players rather than the traditional 156 – this Dubai Duty Free Irish Open also has a smaller purse, from €6 million a year ago when the crowds flocked to Lahinch to €1.25 million: you suspect, though, that whoever ultimately lays claim to the trophy will cherish the title as much as any of its past champions.

Lowry, the world number 30 ranked player, has escaped the PGA Tour bubble Stateside to join the European Tour’s version. Abiding by HSE advise, he at least got to see his wife Wendy and daughter Iris on arriving home on Monday from the US Open, isolating there before driving up to Ballymena on Wednesday for what will likely be his only event in Europe this year. Indeed, he has factored in a five-week break, getting family time and walking his daughter to school, before returning to the US ahead of the Masters.

“[Winged Foot] was probably the toughest golf course I have ever played, mentally and draining over the week,” claimed Lowry of the US Open test last weekend. “I got a good bit of rest the last few days. I’m probably a bit drained but, when it comes to it, I will get out there and the little bit of adrenaline will keep me going,” said Lowry, who will go from battling to making par in the US Open to what is expected to be a somewhat less taxing exam on the parkland course outside Ballymena.

Or, if you listen to the murmurings of others, could one and all be set for another tough exam?

Pádraig Harrington confessed to losing three golf balls in four holes at one point of his practice round, with thick, gnarly rough burying them. “I think our group lost 12 balls between us,” he said by way of making his point. And, with winds gusting 30 to 40 kilometres per hour at times during the first two days, perhaps the course will ask some seriously difficult questions in its own right.

“At this course you could do with fans to help find your ball in the rough. We’ve got a bit of US Open rough out there,” said Paul Dunne, adding: “The course is all about your tee shots. It’s pretty narrow off the tee. It doesn’t give you much respite. I think the key to the week, driving the ball really well and keeping it in play no matter what you hit off the tee. There are definitely low scores out there, but a double or triple [bogey] could come up and bite you pretty quickly . . . . I don’t see anyone playing 72 holes bogey-free. It can bite you are every corner.”

Soren Kjeldsen, one of the shorter and more accurate hitters to be found on tour, observed: “The rough is up. You’ve got to hit proper golf shots here.”

While many players, playing the course for the first time, are taking a step into the unknown, Cormac Sharvin – one of 11 Irish players in the field – is very familiar with it. “I know this course really well, played a lot of golf here. It’s a good test. The rough is thick. My game is pretty suited to a course like this, you have to drive it well. Tee-to-green it’s a good test, so it should set up pretty well,” said Sharvin, who was leading Irishman at Lahinch last year.

Lowry is the headline act and the favourite, using his profile also to wear the 20/20 logo to promote women’s sport. For him, the Irish Open retains a special place in his heart. “I’m here to play the best golf I can. It’s nice to be here as Open champion and it’s nice to be at the Irish Open. I wish there were crowds here and that I could enjoy it that way, but it is what it is . . . the week here will be a lot different to a normal Irish Open. It’s normally a bit of mayhem. It might help me perform better, who knows? We’ll see.”