Irish Open 2020: Four players to watch out for 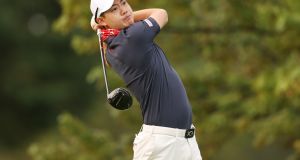 The young Thai golfer is a serial winner in Asia – he has amassed seven tournament wins on the Asian and Japanese Tours – who has yet to make an impact globally, but it would seem to be only a matter of time. Having turned professional just a month after his 15th birthday, Jazz took time out at the end of the 2016 season to join the monkhood, which he later claimed benefitted him on his return to tour life. His biggest win came in last year’s Singapore Open when he held off Paul Casey to win the title, one of four wins in 2019.

From Ardglass in Co Down, Sharvin’s rookie season on the PGA European Tour has obviously been disrupted by the impact of Covid-19 and his form since the resumption has been up and down, with a best finish of tied-9th in the English Championship but missed cuts at his last two events in Spain and Portugal. His accuracy off the tee should be a help this week and Sharvin, who was best Irish player at last year’s Irish Open in Lahinch, can be a factor if he gets all facets of his game working.

A serial winner on the Challenge Tour last year, Hill is one of those players returning to a favourite hunting ground: he won the Northern Ireland Open at Galgorm Castle in 2018. The Scot has blown a bit hot and cold since the European Tour’s resumption, with top-10 finishes in the UK Championship and Wales Open followed by missed cuts in Valderrama and Vilamoura.

The highly-rated Australian won the Omega Dubai Desert Classic at the start of the year (beating Christiaan Bezuidenhout in a play-off) and is one of those to make the journey back from the US Open at Winged Foot (where he finished tied-31st). This is his first time back onto the European Tour “bubble” since its resumption.

Gaël Fickou’s switch to wing a nod to what France expect from Ireland 20:39
Europa League round-up: Celtic let two-goal slip away in France as Lille level up 20:15
Barcelona presidential candidate aiming to bring Pep Guardiola back to Nou Camp 20:12
Connacht’s clash against Benetton postponed after Covid-19 outbreak at Italian club 19:36
Pádraig Harrington hot out of the blocks in Bermuda with opening 67 19:47
Here is your handy guide to sport on television this week