US Open: Winged Foot ready to test the mental mettle of the best 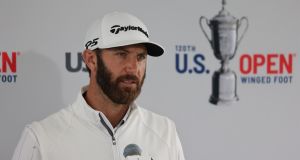 Dustin Johnson: moved into top spot in the world rankings with wins at the Travelers and Northern Trust and having lifted the Tour Championship is looking to contend again. Photograph: Justin Lane/EPA

Some of the video clips posted on social media in the run-up to this 120th US Open at Winged Foot in Mamaroneck, New York have provided a hint of what may unfold.

One is of veteran caddie Billy Foster – the bagman for Matt Fitzpatrick – rolling a ball up the slope to the back of the first green, only for it to roll back a full 40 yards to the front of the putting surface; another is of Spaniard Adrian Otaegui putting up the slope, away from the flag, and allowing the ball return and drop into the hole, like something you’d see in Pirate’s Cove crazy golf.

Such fun-making shenanigans will go by the wayside when the serious business kicks off with the first round of a championship switched to September from its original June date due to the Covid-19 pandemic. But the challenge of a course, with its fearsome reputation, will ensure mental strength as much as any shot-making will be a crucial element in determining its latest winner.

As Jon Rahm, one of those with sights set on making his Major breakthrough, put it: “It just comes to mental strength, who can endure the most and who can endure until the end. It’s that simple.”

Into such a challenge, in a field reduced to 144 players from 156, go a quartet of Irish players: Rory McIlroy, Shane Lowry and Graeme McDowell, who have all lifted Major silverware, along with Cork amateur James Sugrue who has been put into a marquee group alongside Bubba Watson and Lee Westwood.

With no fans in attendance, which has been the norm on tour of late, it will be up to players to fuel their own energy. Some have managed better than most of late. McIlroy and Lowry are two who have yet to fire on all cylinders, with Lowry’s long stint stateside (he has been in the US since February) set to end as soon as his involvement at Winged Foot finishes, before he returns home for next week’s Dubai Duty Free Irish Open and after that a well-deserved reunion with his family.

The US Open is the second of three Majors on the men’s schedule this year. Collin Morikawa lifted the Wanamaker Trophy when winning the US PGA last month, while the US Masters has been switched to a November date.

For the US Open, the switch from June to September has meant lusher grass growth for the West Course at Winged Foot, and it will be the first time the championship has been played in September since 1913 when Francis Ouimet won at Brookline, outside Boston.

“This golf course is going to be one of the more difficult ones [we play], the winning scores have never traditionally been very low. I don’t see that changing this week,” observed Tiger Woods.

The general consensus among the players is that it will be an examination of all facets of a player’s game. Driving. Iron play. Short game . . . . and putting.

“The greens, they’re difficult. I think [they] fit the golf course very well. A lot of the greens are real similar with all the slopes. There’s only a certain area on the greens that are usable. I think it’s good. It’s going to be a good test,” observed world number one Dustin Johnson.

Johnson, seeking to add to his only Major at the 2016 US Open at Oakmont, has been hugely impressive in recent months – ranked fifth in the world when the PGA Tour 2019/’20 season resumed at the Colonial, and moving into the top spot with wins at the Travelers, the Northern Trust and lifting the Tour Championship – and is looking to contend again.

“I expect to play well every week. The game is in good form right now, hopefully it stays in good form for the rest of the week. But it’s one of those golf courses where it’s very difficult and you need to be spot-on if you want to play well,” admitted Johnson.

But DJ knows only too well that the challenge ahead will come on two fronts, one from the course and the other from a quality field that, even deprived of the presence of Brooks Koepka due to injury, features players like Jon Rahm, Morikawa, Justin Thomas and Webb Simpson who have all won on the PGA Tour in recent weeks.

Bryson DeChambeau, too, has won on the PGA Tour – at the Rocket Mortgages tournament – after its resumption and, with his bulked up physique, has intimated a rather more aggressive approach to conquer Winged Foot than many others.

As DeChambeau explained, “Even if I hit it in the rough, I still feel like I can make birdies. I still feel like I can run it up the middle of the green and make a 20-footer . . . . I think the person that’s going to win is going to hit the most fairways and going to make the most putts and also hit it on the greens. It’s a simple formula, obviously. But, again, you have to execute it, right? That’s the whole point of a US Open, it’s supposed to be tough.”

McIlroy, a winner of the championship at Congressional in 2011, has liked what he has seen of the course during the practice days.

Such forward thinking goes for everyone; on a famed course that, three months late, will get to ask all the tough questions. It should prove to be worth the wait.