Wicklow’s Finn bows out after long years of unheralded service 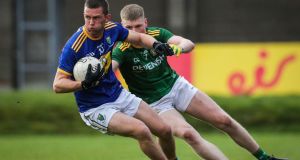 Rory Finn in action for Wicklow against Meath’s Mathew Costello during the Leinster championship quarter-final at Aughrim. “It’s a different world,” said Finn of the contrast between life in Division Four and the top tiers. Photograph: Inpho

In perhaps the busiest ever week of GAA retirement announcements, it’s been all about the departing elite.

Gareth Bradshaw, 14 years a Galway footballer, is among the latest to call it quits, joining a troupe of Division One and Two players from Mayo and Kerry, and many top hurlers, in confirming his exit.

Further down the divisions they’re making similar decisions after years of toil but, as 2020 Wexford manager Paul Galvin recently noted after a stint in Division Four, it’s a life spent generally beneath the radar.

Rory Finn, the former Wicklow captain, lived that life for 13 years before stepping away in recent days. Truth be told, the Kiltegan man hadn’t planned to make any announcement at all but his club wished to acknowledge the occasion and word seeped out, leading to a congratulatory Tweet from the GPA.

So how was his 13 years as a Wicklow player?

“It’s a different world,” said Finn of the contrast between life in Division Four and the top tiers.

“When you join a Division Four team, and any Division Four player will tell you this, you’re not looking at Leinster championships or All-Irelands, you’re looking principally at the league and hoping for a couple of championship games then, maybe a win in Leinster or a win in the qualifiers. Anyone who tells you any different is bullshitting you because that’s the reality.”

Johnny Magee, one of five Wicklow managers that Finn played for, once made the point that his players typically compete in the worst conditions and on the heaviest pitches throughout spring. In all of Finn’s time on the panel – he missed the 2009 Championship under Mick O’Dwyer when Wicklow played six games – they never played more than three games in a summer.

Neighbours Dublin, in contrast, played nine championship games in 2019. Tyrone played 10 in both 2018 and 2019. Again, another world. That’s not to suggest Finn didn’t enjoy every minute of it and he bowed out on a relative high, helping Wicklow to promotion to Division Three last season and a championship match win over Wexford.

“We actually won the Division Four title in 2012 which was one of the high points,” shrugged the versatile midfielder at their lack of championship progress.

“I’d go back to 2018 when we beat Offaly, a huge win for us under John Evans, absolutely huge, then we go out the next day against Dublin. We drew Cavan in the qualifiers, a team just promoted to Division One. If we’d even got another Division Three or Four team, we’d have had a better chance to really push on and generate momentum because you can feel it in Wicklow that the supporters are just dying to get behind us.”

So why leave now, just when Division Three status has been achieved under a passionate and energetic young manager in Davy Burke?

“Being honest, even coming back last year was a bit of a push,” said Finn, a married father of two. “My body probably wasn’t able for what’s demanded now of a footballer competing around the middle third, it’s all about covering kilometres and kilometres. I’ll be honest too, Davy Burke is a very hard man to say ‘no’ to.

“He has such confidence and very quickly you find yourself rowing in behind him. If Wicklow can keep Davy there and with quality players coming through, lads like Eoin Darcy and Andy Maher, and sure Mark Jackson for me is as good a goalkeeper as what’s in the country, then I think the future is really bright for Wicklow.”