‘Was my effort honourable?’ Mayo warriors bow out with heads held high 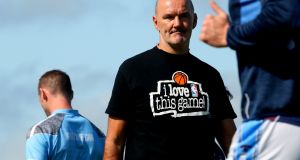 So far this week, Mayo’s midfield pairing from the 2017 All-Ireland final have retired, as well as their goalkeeper from that day and one of their wing-forwards. And we await further developments.

Seamus O’Shea is the latest to pull up stumps and call it quits, following Tom Parsons, David Clarke and Donie Vaughan into the category of “former Mayo star”.

Each of them released carefully crafted retirement statements, thanking coaches, team-mates and family, though what we wouldn’t give just now for their unfiltered thoughts.

They all pushed so hard for so long to win the big one and continuously came up short, mostly against Dublin. Did the successes outweigh the sacrifices and the soul crushing defeats?

Liam McHale has some insight into pulling the shutters down on a Mayo career after being repeatedly brought to the brink of your wildest dreams.

“For me, it was all about having a clear conscience at the end of it,” said McHale, Man of the Match in the drawn All-Ireland final of 1996 but ultimately a runner-up that year, as well as in 1989 and 1997.

“It’s so difficult to win an All-Ireland. Everybody has to be on the same page, you have to be prepared to maybe break your leg, to break your nose, break your jaw, not to pull out of a tackle you might get injured in, you can’t fail to make that tackle, that 100m run to support a team-mate.

“That’s what it was all about for me and I would be very satisfied that I gave my best and in a lot of the bigger games played my best too. That’s the thing for me, was my effort honourable? I can look back now and say, ‘Yeah, it was’. That’s how I reflect on it and all of those guys retiring now can say the very same.

“Seamus O’Shea, Donie Vaughan, David Clarke, these guys are warriors. Tom Parsons had a car crash type injury in 2018, nearly lost his leg, and yet he comes back and makes a contribution to Mayo, helps them to get to another All-Ireland final. Those guys all carried themselves with honour.”

That’s not to say there won’t be deep regret there this week in the minds of all those players and perhaps for Keith Higgins, Colm Boyle and Chris Barrett too if any, or all, of them choose to retire also.

“You can say what you want but when you hit those years 29 to 32, particularly in a team like Mayo that’s come so close so often, the last three or four years of a career become about winning that All-Ireland,” said McHale, a former selector too.

“It’s not about fun or enjoyment or making your family happy, it’s about trying to get over the line and win that All-Ireland. And you do hang around, when you’re part of a team like Mayo you want that elusive medal, you’ve been part of it for eight or nine years and you’ve come so close you can almost taste it. It’s very hard to walk away.

“The real team oriented guys are those who would have been used to starting but put up with maybe playing for 15 minutes or even just making the bench, just to help push the group on.

“I’d say all the boys were very hopeful this (the 2020 final) might have been the one but it didn’t happen. It’s tough, you feel very sorry for them. Those boys are in the same boat as the ‘96, ‘97 lads, had four or five rattles at it and lost by a point, or got a draw and lost the replay, all that stuff. You’re so close.”

O’Shea’s decision yesterday to follow Parsons into retirement dissolves a storied midfield partnership. The duo lined out for the 2016 and 2017 All-Ireland finals and again for the start of the 2018 Championship against Galway, the day Parsons suffered a horrific knee injury.

The current Mayo midfield axis of Conor Loftus and Matthew Ruane looks a lot different, not as powerful or as aerially dominant but more dynamic and mobile.

“I know Conor very well, he would have played basketball and I would have coached him a lot, he’s a lot bigger and stronger than people think,” said midfield great McHale. “He’s a very good footballer and kick passer. I’m looking forward to seeing him this year because it’s the first time really he’s free after groin injuries and I’m looking at him to have a big contribution.

“I think himself and Matthew Ruane are the future of the team there, they both have the capacity and the skill to improve. With no Parsons or O’Shea breathing down their necks they might just relax a bit and feel the freedom to really develop that partnership too so I’m looking forward to watching that develop.”