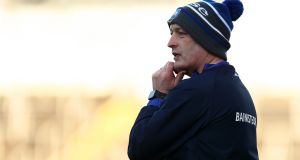 Liam Cahill: the new manager has overseen a revival in Waterford’s form over the course of the league. Photograph: Tom O’Hanlon/Inpho

Division Two
Fermanagh v Armagh, Saturday, Brewster Park, 7.0
The compressed nature of Division Two is such that Fermanagh aren’t in dire straits just yet despite being bottom of the table. Technically, in fact, they can still be promoted but we can presume Ryan McMenamin will settle for survival. They have a good recent record against Armagh in Enniskillen but they’ve been posting around 12 points a game in this campaign and are the most goal-shy team in the four divisions. It’s hard to see that sort of return being good enough here. Verdict: Armagh

Division 1A
Limerick v Waterford, Saturday, LIT Gaelic Grounds, 5.30 - Live Eir Sport, 5.0
Two sides who appear to have got more than most out of the league. Limerick needed a point of focus after the winter’s trials and Waterford needed to show their new manager what they’re made of. Even in defeat last week, the gumption Liam Cahill’s side displayed to make a game of it against Tipp, despite being reduced to 13 men for so long, suggests a certain togetherness at least. They’ll need every bit of it here against a Limerick side showing seven changes from the Westmeath game. Verdict: Limerick

Galway v Tipperary, Sunday, Pearse Stadium, 2.0 - Live TG4, 1.30
Whichever side loses here will have no game for the next nine weeks, which may or may not provide an incentive if they’re in close quarters coming down the stretch. Galway’s league was in danger of fizzling out before they found a bit of rattle and hum against Cork last week. Tipp made heavy weather of it against Waterford and might not be overly pushed about the result here. Verdict: Galway

Relegation play-off
Westmeath v Carlow, Sunday, Cusack Park, Mullingar, 2.0 - Deferred coverage TG4, 3.45 (Extra-time; Winner on the day)
Of these two, Westmeath have made much the better first of their campaign in among the big beasts. They should have beaten Cork and went stride for stride with Limerick for much of the way last week. Carlow, by contrast, have been hollowed out by injuries and haven’t been able to keep up with the pace at all. That said, Colm Bonnar’s side had the upper hand in both the league and the Joe McDonagh when they last met in 2018 so the fixture won’t spook them. Verdict: Westmeath