Replay set for July 7th after rip-roaring encounter in Castlebar 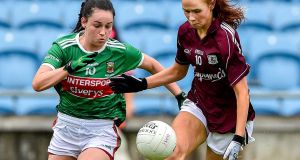 Galway and Mayo will have to do it all again after a rip-roaring TG4 Connacht SFC final finished level in Castlebar on Sunday.

Tracey Leonard had the chance to win it for Galway with 15 seconds left but she missed her free kick and Mayo deservedly came away with the ball before the final whistle sounded. The sides will do it all again on July 7th.

Galway got off to a flying start with a fine goal from Louise Ward when she waltzed through and blasted to the net, but from then on it was nip and tuck.

Rachel Kearns was moving well at full forward for Mayo and kept Galway honest at the back but the yellow card flashed at wing back Ciara Whyte left Mayo under pressure and they trailed 1-4 to 0-2 after the first quarter. Roisín Leonard, Tracey Leonard, Sarah Conneally and Olivia Divilly all pointed, but Mayo’s ferocious tackling was frustrating Galway.

The Green and Red powered back into it with Sinéad Cafferky, Sarah Rowe and Kearns to the fore in attack. Galway were held scoreless for a long period but eventually Tracey Leonard got them back on the board with a brace to leave Galway four points clear at the break, 1-6 to 0-5.

Conneally kicked another Galway point straight after the restart but Mayo were on a mission and responded explosively as two goals arrived inside 60 seconds. Rachel Kearns volleyed home after a sizzling run from Kathryn Sullivan and Éilish Ronayne scrambled home another one when Grace Kelly’s effort dropped short.

That spurred Galway into life and points arrived from Tracey Leonard, Megan Glynn and Aine McDonagh to leave them two clear again.

Mayo swept down the pitch again and had the chance to go in front after 43 minutes but substitute goalkeeper Dearbhla Gower saved Rowe’s penalty.

That didn’t deter the Mayo and when Grace Kelly raced 50 yards to plant the ball in the net after 50 minutes the home side were one clear, 3-6 to 1-11.

That set up a grandstand finish and Mayo were dealt a huge blow when team captain Niamh Kelly was red carded and Galway were handed the initiative, but all they could muster was a single point from Tracey Leonard before the final hooter sent the thriller to a replay.

1 Saudi Arabia-funded takeover of Newcastle United in serious doubt
2 Gerry Thornley: Home and away Six Nations could be its ruination
3 Net-tricks: How John McEnroe became the inner voice of a 15-year-old girl
4 Decision expected next week on staging of College Football game in August
5 RTÉ to start summer racing coverage with 1,000 and 2,000 Guineas
Real news has value SUBSCRIBE