Declan Bonner sounds note of caution to his Donegal destroyers

‘We let Tyrone back into it as well . . . so we don’t want to concede those scores’ 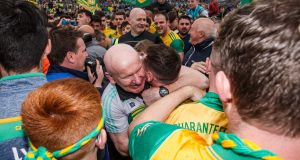 Donegal manager Declan Bonner celebrates with Jamie Brennan after the victory over Cavan in the Ulster SFC Final in Clones. Photograph: Tommy Dickson/Inpho

As a player and a manager, Declan Bonner knows better than most the unreliable nature of the Ulster championship. His All-Ireland winning side were drowned in the rain by Derry in 1993 and when he returned as manager five years later, Joe Brolly was still lurking about the darker corners of the pitch for Derry and popped up to deliver a last-minute goal at the end.

But in the past two years, in his second stint as manager, Bonner has watched his young team cruise to consecutive Ulster final victories. They have become to this arena what Tyrone and Armagh were before them: the destroyers of other county’s romance.

“Ah, we were top-class in the first half,” Bonner acknowledged after watching Michael Murphy’s captain’s speech.

“There were scores coming from all over the pitch and some excellent passages of football. We were dominating the kick-outs and we got scores with the likes of Eoghan Ban [Gallagher] and Ryan [McHugh] coming from deep, Hughie MacFadden as well.

“Second-half, we conceded two sloppy goals and all but that is for another time. It is but we do want to be more clinical and see games out. We let Tyrone back into it as well, a match that we had well won, so we don’t want to concede those scores.”

The 2-11 they coughed up to Cavan in the second half was a worry. But by then, Donegal were in cruise control and it was notable that they both missed and passed up on goal opportunities. Handsome as their finishing total was, it could have been greater. But Jamie Brennan’s ascension to the first rank of attacking forwards continued with another goal-from-nothing when Cavan threatened a late run.

“We had a couple of goal opportunities in the first half which we didn’t take,” said Bonner. “Paddy McGrath was unfortunate with one of them. Jamie Brennan has been doing that all year. He’s stepped up to the plate over the last two years since I’ve been involved. I’ve had Jamie since he was under-15, under-16. I know the quality within the guy. Delighted for Jamie, delighted for the whole group.”

It was a game when the senior brigade of Murphy, Neil McGee and Paddy McGrath were content to knuckle down and leave their younger team-mates to lead the attack and make decisions. Murphy’s importance to this generation of football players in Donegal is inestimable but in this final, he seemed happy enough to see Donegal play their way to victory without him being the central creative figure.

“You’d need to see the way Michael conducts himself both on and off the field,” added Bonner. “He’s a real leader. He’s an inspiration for everyone involved. He demands the highest of standards – that’s important for the whole group. We have a lot of young lads there. They look up to Michael, Paddy McGrath, Frank, Leo, Neil McGee – they are all role models for these young men coming through.”

Mickey Graham’s hugely accomplished first season with Cavan is at a critical juncture. Had they folded here, then bouncing back in the qualifiers would have been a tall order. As it stands, a Super Eights placing seems highly plausible. They learned a hard lesson here in the first half.

“Yeah, look, we looked at previous games and we knew that Donegal would get a lot of men back there and that that ball mightn’t be on and we would have to run it through the hand,” said Graham. “And probably ran it too much at times and got turned over in the first half, bringing the ball into traffic down the middle. And it is something we will have to rectify moving forward.”

But Graham felt certain that the significance and novelty of the occasion did not affect his players.

“We probably got off to a slow start. Donegal started off on fire and came at us in numbers and over ran us at times. It took us a while to settle into the game but it will not be for a few days until I get my head around it.

“We are not going to cover up anything. A lot of things we talked about didn’t happen for us today. Especially in the first half we got turned over at times. We kicked a few bad wides and dropped a few balls short. It is the one thing you can’t do against Donegal because they have so many runners all over the field and they punished us for that.

“Let’s not paint a picture. We are hugely disappointed. We are one game away from the Super Eights and it is going to be a huge test of our character. We need to dust ourselves off.”

1 GAA players spend just 2.5 seconds within 2m of each other during play
2 LeBron James among those to slam Drew Brees’ anthem comments
3 How a GAA club sprang up in east Belfast over Sunday breakfast
4 Social distancing takes a back seat as fans return in Hungary
5 Connacht continue player hunt as six academy graduates promoted
Real news has value SUBSCRIBE