Ulster Council confirm provincial final will not be held in Clones 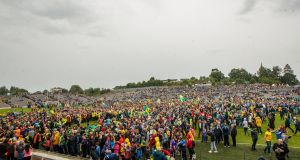 Within the next week or so details of the 2020 intercounty championships will be finalised. On Thursday, Ulster GAA led the way by releasing its football schedule and confirming that Clones will not be hosting this year’s final.

The GAA is expected to launch the fixture schedules for the provincial championships maybe as early as next week. Whereas the draws are known, times and venues have yet to be settled. On the basis that nobody is expected any great increase in the numbers allowed to attend, provincial councils have a wide range of options.

With the championships running nearly all the way to the winter solstice, floodlit venues are likely to prove popular. Broadcast schedules are also significant, as Ulster CEO Brian McAvoy told The Irish Times in relation to the Clones decision.

“The Ulster final is a four o’clock start this year because of the TV schedules. Ulster and Munster football both have finals that day, November 22nd, and have to work on the basis that the first match is on at half one. Even that would be too late a start for Clones because the plan is to finish on the day so you’re looking at possible extra time and a shoot-out.

“If it was simply to go to a replay, that would have worked but with ‘finish on the day’ even 12.30 mightn’t have been early enough. Also a final has to cater for a presentation so you’re really looking at getting everyone out in daylight.”

Ballybofey, Derry, Omagh, Armagh. Newry, Cavan and if necessary, Croke Park, all have lights and capacity is not going to be an issue even if current limits of 200 are raised.

According to McAvoy, Ulster, which is currently allowed admit 400 to 500 spectators, doesn’t expect any upwards revision of the regulation to surpass four digits.

During the 2000s the Ulster final was played three times (four, including the 2005 replay) in Croke Park but leaving aside those finals, 2004-06, you have to go back nearly 50 years to find the last time the provincial final wasn’t staged in St Tiernach’s Park.

In 1971 the Down-Derry final took place in Casement Park but thereafter was moved to Clones.

Casement’s redevelopment is still stuck in the planning process but McAvoy sees light at the end of what has been a very long tunnel for the at time controversial project.

“I would be hopeful that we’d get a decision within weeks.”

Meanwhile, the Covid crowd restrictions mean that the smaller Corrigan Park is back in consideration for championship matches, subject to getting a clean bill of health from Belfast Council.

Leinster is also pondering venues in the lead-up to its provincial finals in Croke Park, football on the same evening as the Bloody Sunday centenary commemoration, November 21st and hurling the previous Saturday, November 14th.

O’Moore Park, Portlaoise is likely to find itself in demand, as it has access to eight dressing-rooms – four beneath the stand and another four in the Centre of Excellence behind the ground, which have independent access to the pitch, making the venue ideal for double bills.

“We’ll make decisions on some of the venues closer to the time,” according to Leinster CEO Michael Reynolds. “One issue for us is that we’ve only Portlaoise, Dr Cullen Park in Carlow, Croke Park and Parnell Park with floodlights. Any match you’re talking about at that time of year can’t start any later than 1.30 unless it has lights.”

He also says that they’ll be keeping an open mind on Croke Park.

“If attendances are limited it’s very hard to say to counties that they should come to Croke Park, particularly if Dublin is still heavily infected, when other venues are more convenient.”

Kieran Leddy, Munster CEO, echoed the views of his colleagues, saying that smaller county venues would be considered – such as Fraher Field in Dungarvan, which has lights, Sixmilebridge in Clare – for the football championship.

“We will probably spread the hurling championship fixtures around three venues: Thurles, the Gaelic Grounds and Páirc Uí Chaoimh.”