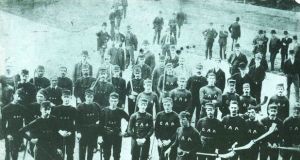 The hurlers who toured the United States in 1888, in what became known in the GAA as the ‘American Invasion’

On February 9th, 1890, the Brooklyn Eagle ran a sizable feature headlined, “Hurling and its Growing Popularity in America”.

Written by Samuel Newhall Crane, a well-known baseball player turned journalist, the piece was syndicated and, over the next couple of weeks, appeared in dozens of newspapers all across the country.

From the prairies to the Pacific, readers of evocatively-titled local publications like the Woman’s Mission Star, the Riley Regent, and the Concordia Blade were treated to Crane’s paean to a foreign sport he believed was on the brink of a major breakthrough in the United States.

“There is probably no athletic game now known to the world that is older than the game of hurling, which seems about to become quite popular with our athletes,” wrote Crane.

“In America, the game is just beginning to get a foothold, but the outlook for it seems to be particularly good. It would be well if every athletic club would introduce it as one of the features of its regular games. Once the public come to know its good points, it could scarcely fail to become hugely popular.”

However, it might be deduced from Crane’s well-informed panegyric that the natives who did witness “hurling” (the New York press had used quotation marks to describe it in 1888) at the Manhattan Athletic Grounds on 86th Street were smitten by the quality of the fare on offer. Aside from offering granular detail about the rules and the format of the code, he also resorted to some good old-fashioned evangelizing on its behalf.

“Hurling has its own excellencies, and as a winter game on the ground or on the ice, it has no superior,” he wrote. “Not only is it healthful, but it is safe, simple and intensely enjoyable. Anyone can play who can learn to play it, and anyone who cannot learn to play it can learn nothing, for it is simplicity itself. The outfit required is easily acquired. A ball and a stick with a crook on one end and there you are. All that is needed then is a clear day and a level field. On a crisp cold day there is nothing that will stir up the blood, liven up the muscles and invigorate one generally in a more complete manner than a good, lively game of hurling.”

Smart enough to attend the prestigious Massachusetts Institute of Technology, Crane’s time as an undistinguished second baseman, flitting between the minor and fledgling major leagues, was just then coming to a premature end after the scandal of his arrest the previous year for eloping with Hattie Fraunfelter, the wife of a Scranton fruit-dealer.

She had taken $1500 from her husband’s business before catching the midnight train to New York to set up home with Crane under the guise of Mr and Mr. Morrison. His love letter to the joys of hurling was an early dabbling in a celebrated journalistic career that spanned more than quarter of a century.

“To become an expert hurler no peculiar qualifications are required,” wrote Crane. “A small man can play as well as a big one, all other things being equal. Activity is the main thing, combined with quickness of sight and good judgment which enables the player to use his hurly (sic) with accuracy and effect . . . .There are opportunities for rough play too . . . Free pucks are always followed by the wildest sorts of scrimmages and are always an exciting feature of a game that is ordinarily exciting enough.”

For him to seriously believe America might wholeheartedly embrace the Irish code wasn’t as far-fetched then as it seems now. Growing at such a pace that New York already boasted 22 hurling clubs by then, the standard around town had been seriously improved by the fact half the hurlers who came on tour in 1888 never went home.

In an era when pedestrianism, a form of racewalking often involving endurance events that lasted six days, was a massive box office draw, a stick and ball game that Crane reckoned was a curious and thrilling amalgam of hockey, lacrosse and polo surely had a chance of making it big too.

This was a time when the American sports landscape had not yet been colonised by what became the national sports. Professional baseball was still having teething problems and the first World Series wouldn’t happen until 1903.

Grid-iron remained an exclusively collegiate game at that point, the formation of the forerunner to the NFL was a full three decades down the line, and James Naismith was a year away from nailing peach baskets to the walls of a Springfield gym to invent something called basketball. If Crane believed hurling had a genuine opportunity to take root, why then did it fail?

“It is the favourite game of the fairies,” he wrote. “There is scarcely a village in all Ireland where you can not find some voracious old gentleman or dame willing to tell of the games they have seen the ‘good people’ all dressed in green playing on some green hillside in the gray of the evening or the moonlight.”

Perhaps he oversold it just a tad.