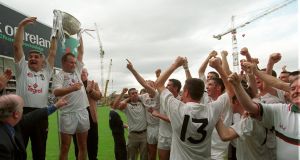 If and when this year’s football championship takes place it will be the first in 20 years to be conducted on a sudden death basis. The last time two counties met in a winner-takes-all match in the provincial championships was in August 2000 when Kildare won the replayed Leinster final to take a second provincial title in three years.

The format would change the following October when a special congress approved the introduction of the All-Ireland qualifiers.

Paddy Russell refereed the first match, having taken charge of the 1998 fixture between the counties, which also went to a replay in the years before referees were changed after the first match.

“I remember it particularly well,” he says, “because one of my umpires died in between both games. Sammy Ryan stood in for me in to referee an under-16 game in Golden during the week when I had to go to a funeral and [he] suffered a heart attack at half-time.”

Still taking the whistle in club matches at 62, Russell – twice an All-Ireland referee – says that a big change he noted with the new system was that summers were getting busier.

“As a referee you were getting more games because of the qualifiers.”

Pat McEnaney was in charge for the replay and he retains a soft spot for the old days.

“It’s less frantic but it’s less challenging. When you’re top of the ladder as a referee, nothing beats knockout. I used to thrive on it. The bigger the pressure to get the calls right the more it got the best out of you. When you’ve a knockout game, as a referee the focus was always that bit greater. It’s a notch up.”

By 2000 the relationship between Kildare and Dublin had shifted. Mick O’Dwyer’s second stint in charge, 1996-2002, saw the former beat their opponents in 1998 for the first time in 26 championships. They reached an All-Ireland final only to get caught by John O’Mahony’s rising Galway side.

Dublin had on the other hand been struggling in the aftermath of winning the 1995 All-Ireland.

One of the most senior Dublin players was wing back Paul Curran, Footballer of the Year in the victorious All-Ireland campaign in ’95. He points out that the players wouldn’t even have been aware of the coming seismic change and, therefore, the historical curiosity the 2000 Leinster final would be in the future.

Kildare took a while to warm up and Dublin had chances to win the first day but it was the failure to close out the replay that most haunts Curran.

“In 2000 there wasn’t much talk about the new format from a players’ point of view. It was business as usual.

“That afternoon in the replay we should have been out of sight – and I mean out of sight. We played some incredible football. It was 0-11 to 0-5 at half-time but there were a couple of turnovers just before the break that went against us so it could well have been 0-13 to 0-3.

“That stays with me. Then of course, Kildare came out and got two quick goals. After that there was one team on fire and one beaten docket. I’ll never forget that; we should have been out of sight.”

One of the players he marked was Dermot Earley, already a Young Footballer of the Year and All Star; in fact the first day their paths crossed when the Dubliner was unlucky to be penalised for what looked a deftly legitimate tackle on his man. The free was scored but Earley would have a major impact in the replay when Kildare were on the ropes.

“Then in the replay – and we weren’t expecting this – Dublin shot out of the block and played unbelievable football. We were at sixes and sevens. I do remember going in at half-time and getting a grilling from Micko about what we were doing wrong but there was never a sense that this was gone.

“He was saying you have 35 minutes to put this right if you do, a, b, and c. We won the throw-in and from that, I got a goal. Then, we won the kick-out and got another goal from Tadhg Fennin.

“After two minutes and all their hard work, Dublin’s lead was gone. We went on to win by five – they were dead and buried.”

A provincial title in those days was an end in itself. Kildare had won one in 44 years whereas Dublin were in the midst of going seven seasons without success. But there was also an edge to knowing that your season was always 70 minutes away from abrupt termination.

Kildare marched on and lost the All-Ireland semi-final, again against Galway, and haven’t won Leinster since.

“In some ways I miss that be-all and end-all aspect,” according to Earley. “You had to perform. If not, you were out and it would be six or eight months before you pulled on a county jersey again. I think it brought out the best in players but now, you don’t have a knockout match until the All-Ireland semi-finals!

“I remember in 1995 – I wasn’t playing county yet but my father was managing Kildare and we got knocked out by Louth in the first year of televised championship. The first thing that struck me when I walked into Newbridge was that RTÉ had the Sam Maguire up in the temporary studio.

“I remember thinking, that’s the first time he’s been here since 1928! A week later my club Sarsfields – and we were county champions at the time – unexpectedly lost and that was it for the year.

“Maybe that helped to push you on.”

Dublin weren’t even halfway through the long 16-year wait for the next All-Ireland. Defeats in Leinster were now a feature of their landscape.

“These things happen and we didn’t cope particularly well,” says Curran. “We were playing a very good team whereas we weren’t a terrific side. We simply weren’t good enough and not capable of coping with things like that. We were capable of good football and winning matches but not winning All-Irelands.”

He played on into the qualifier era and felt counties easily adapted.