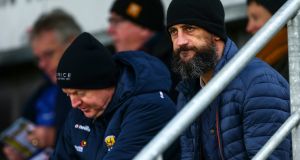 The All-Ireland football championship has yet to begin and it’s already lost a little of its shine. Paul Galvin’s decision to step away from his role as Wexford senior manager prematurely ends what looked, from a distance, like a promising partnership. Wexford could be defined as a hurling primary storing a rich if flickering football tradition. And Galvin, who emerged from the heart of Kerry hurling country to become one of the Kingdom’s iconic football figures, had both the energy and intensity to attempt to reawaken it.

His decision to this week step away from a role to which he was appointed last June is another example of the all-consuming nature of intercounty management. There was a happenstance element to his initial appointment. Ciarán Deely, the Wexford man who managed London, had invited Galvin over to do a couple of sessions with his squad in Ruislip. Although he had retired from Kerry in 2016, Galvin had continued to closely study the game; his Sunday Times column often cut straight to sometimes forensic readings of individual and collective performances.

When the Wexford position came up, Deely was an obvious candidate but wasn’t in a position to take the role. Galvin’s name came up and as he told his former Kerry team-mate Tomás Ó’Se in a podcast, he agreed to put himself forward partly to experience the rigours of an interview. In doing so, he literally talked himself into the job.

“I do have a belief in Wexford football too,” he said that day.

“I would read a lot about the history of the game and Wexford had a huge tradition and quite a relationship with Kerry there as well. I feel they are a kindred spirit with Kerry in their style of play and the culture in the county.”

That conversation took place in mid-July and over the hour-long chat, there is no mistaking the enthusiasm in Galvin’s voice when he was talking about the team.

“I have loads of time for them, Tomás. I think these guys will do well. Awh, there is some really exciting talent down there. Really and truly. I believe in ’em. But it is hard at the minute to expect them to be at the level of a team who will just start calling the shots and start running things in the dressingroom and that kind of thing – they are probably not quite there yet.”

Wexford’s league results had been sporadic before the coronavirus postponement: a grim 3-10 concession and defeat up in Antrim; a one-point win over Waterford, an eye-catching 4-15 against London and a one-point defeat to Sligo. But it was always going to take a couple of seasons for Galvin’s influence to take effect. And with two games remaining against table leaders Limerick and Wicklow, they were strongly placed to challenge for promotion from Division 4. Those concluding games will immediately precede Wexford’s Leinster championship game with Wicklow.

The early part of Galvin’s pre-season build-up went through a turbulent period with the departure of two senior players. The attention that their exit attracted alerted Galvin to what he must have already known: because he was involved with Wexford, the team was suddenly under closer scrutiny. As he explained to Ger Gilroy on Newstalk, he was disappointed by the way the information was released and said that from his perspective, he wasn’t interested in closing doors on anyone in Wexford. But once the league began and the focus returned to the higher division, he was able to get on with the business of coaching.

The chaos caused by the Covid crisis is the chief reason Wexford have lost their manager. In his statement, Galvin explained that he and his family have moved from Dublin to the west of Ireland. The travel time to training changed from an hour to what would have been an impossibly gruelling and time-consuming round trip.

So after 16 months in charge, the football public was given just a small glimmer of what Galvin hoped to achieve with Wexford.

“Energy around the field is a big thing for me,” he told Gilroy in laying out his vision.

“I guess you can only transfer what you can feel within you from a physical and personal [standpoint] and I would hope to have a really energetic team. My big thing was to be good to watch and be exciting to watch.”

The Wexford footballers will have continuity in that Shane Roche, who was part of Galvin’s backroom squad, will take charge until the end of the season. For neutrals, the absence of Galvin on the sideline is a disappointment. The fate of the counties rooted in Divisions 3 and 4 is becoming an increasing concern for the GAA, with the fear that the gap between the top and bottom 10 has become insurmountable and that players will find fewer and fewer reasons to commit to the demands of intercounty football.

The emergence of Galvin as a champion of the Wexford cause generated an immediate burst of energy and excitement at the thought of how such a dynamic on-field presence might shape a county team whose players had competed for provincial honours less than a decade ago.

It is easily forgotten that during Dublin’s All-Ireland revival summer of 2011, they defeated Wexford by just a single goal in the provincial final. However, Wexford haven’t won a championship match in Leinster since 2014, also the year of their most recent Leinster meeting with Dublin: by then, the gap between the teams on the scoreboard had inflated to 0-16.

Galvin had his work cut out. The pity is we never got to see anything like the finished product. But his relocation could spell good news for football counties in the west.