Time for another Armagh and Tyrone death embrace 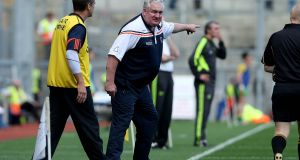 Former Armagh manager Paul Grimley: “The 2003 final and that semi-final hurt Armagh people a hell of a lot. When it came down to the crunch in both years Tyrone won those battles.” Photograph: INPHO/Donall Farmer

Revisiting the labyrinth of this 2005 trilogy has little to do with Saturday’s reprise. On Saturday, every able man, woman and child will migrate south, returning to Croke Park 12 years on to witness Kieran McGeeney stranded on the same sideline – this time by choice – a few feet adrift of Mickey Harte’s sturdier life raft.

Some appetiser: Armagh and Tyrone in another death embrace.

A small mercy for the Orchard County is Peter Canavan hidden away in the Sky Sports studio with McGeeney a silent stature, as he’s been all summer, for Tyrone’s expected drive deeper into August.

The Ulster champions this and last year seem miles ahead in the hunt for Sam Maguire. Armagh will labour their progress via Jamie Clarke and a wily backroom from the previous generation. John Toal, Paddy McKeever, Justin McNulty and Paul McGrane – heroic figures denied more All-Irelands.

Medals that ended up in Tyrone.

We begin where these parallel paths diverged, perhaps forever. In the booming summers of 2004 and 2005, Croke Park welcomed in the Ulster football finals. The 2005 version needed a replay between Armagh and Tyrone.

The second most famous Michael Collins was referee. He incorrectly sent off Peter Canavan and Stephen O’Neill, yet letting Ryan McMenamn’s knee drop on John McEntee’s face and chest away with a yellow card.

“But the All-Ireland semi-final was a great game, probably goes down as one of the top 10 games ever,” Grimley continued.

Armagh had it sown up until an “unwise” decision coupled with Tyrone’s unbridled desire halted clean strides towards a dynastic era.

“The 2003 final and that semi-final hurt Armagh people a hell of a lot. When it came down to the crunch in both years Tyrone won those battles.”

“From 2002 to 2006 the feeling would be that we, Armagh, left a lot behind us,” said Grimley. “We all have to take responsibility for that.

“In fairness to Tyrone they went from 2003 to 2008 winning their three, and they continue to compete in the latter stages of the All-Ireland series.”

Greatness abandoned Joe Kernan’s team during those astonishing minutes after he withdrew his captain and now successor as Armagh manager.

It was Seán Cavanagh, McGeeney’s marker, that grabbed the ball after McKeever (still going from the Armagh bench this weekend) tugged the shirt sleeve of Stephen O’Neill in sight of Hill 16’s towering posts as time ticked towards nothingness.

“Please, please, Peter. Take that,” a young Cavanagh implored. “And he said, ‘No, Muggsy is all right for the job’. And I said ‘No, you take it Peter, it’s the last kick of the game. There’s no one else better to take it.’”

Canavan offered glory to Owen Mulligan but the peroxide blonde free-taker responded with a broad smile: “I don’t mind, I don’t mind,” he informed his former school teacher.

Canavan swung the free over the bar.

Armagh were two points ahead with seven minutes to go when Kernan sent Enda McNulty in for McGeeney.

“There has been a lot of talk over the years about the decision that was made,” said Grimley, Kernan’s right-hand man that day. “The decision was made and as part of the management I would never turn around and try to run away from that responsibility but it proved an unwise decision.

“Seán Cavanagh has since said he couldn’t believe it. But I remember Armagh went in front just after Kieran came off when John McEntee put over a fantastic long-range score.

“It’s hard to put your finger on it. We missed a lot of scores that day. I’m not going to hang anyone.”

But it mattered. Tyrone, with their iconic figure on the field, finished stronger. They progressed to the All-Ireland final where they dethroned Kerry, and have kept Armagh in their rear-view mirror ever since.

“I don’t really look back,” said Grimley, “We all know what we left behind us. We know we were capable of achieving a lot more. Be that complacency [when losing to Fermanagh] in 2004 or the great Conor Gormley block [on Steven McDonnell] in 2003. God doesn’t make any more yesterdays, only tomorrows.”

The value of the early century Armagh team being part of McGeeney’s backroom this Saturday evening is not lost on Grimley.

“Kieran has opinions from four very strong individuals. They are humble guys, it would be Armagh first them second. I’d say the bond between those guys is noticed by the players and that has reflected onto them.”