Roscommon desperate to get to where Mayo have been 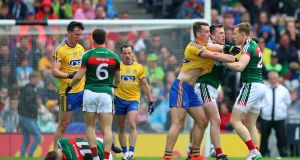 Mayo’s aversion to anything approaching an easy life endures. More and more, their matches in the 2017 championship feel like those everlasting candles you get on birthday cakes. Regardless of how hard they blow, Mayo seem to find the job of extinguishing their opposition mountainous. One of these days, it will surely get them.

Their 1-12 to 2-9 draw with Roscommon in Croke Park on Sunday means that three out of their last four games this summer have been level at the long whistle. On all three occasions, they have had a lead in stoppage time and have conceded the equalising score. Of their last 13 games in Croke Park, nine have either been drawn or decided by a point.

It all means that Mayo and Roscommon will be back here on bank holiday Monday, battling for the right to meet Kerry in the semi-final. In front of 65,746 visitors to Croke Park – including a busload of Syrian refugees from Ballaghaderreen – they offered up a compelling garden-fence squabble. Heavy rain made the pitch a lottery at times, much to Kevin McStay’s annoyance afterwards, but even that gave no good explanation for Mayo’s lacklustre shooting day. They only scored four points after half time, kicking nine wides in that second half alone.

Ultimately, they were blessed that it was a young Roscommon team sitting across the table from them. McStay’s side went a huge chunk of both halves without troubling the scoreboard, rushing out to a 2-2 to 0-1 lead after 12 minutes but then only adding a further point before the break. Despite having much of the play in the closing stages, the Rossies needed Donie Smith to land a dastardly injury time free from out on the right to force a replay.

“There was plenty of belief in our dressing room,” said McStay afterwards. “There really was. They are a young team and they want to get to where Mayo have been. They are hungry for it, they are ambitious for it. They just don’t have the full knowhow yet or the strength or conditioning yet. They are only three years into that programme, Mayo are seven into that programme. They are big, big men when you see them coming down the tunnel.”

Mayo stuck Lee Keegan on Enda Smith in midfield, negating the Rossie star’s attacking influence and putting him on the back foot. The Footballer of the Year had 1-3 on the board by half-time, including the crucial goal 36 seconds after Ciarán Murtagh had banged home Roscommon’s second.

Though stuck at fullback for the second half after Roscommon moved Smith to the edge of the square – an outcome McStay pronounced himself delighted with – Keegan still had a major influence. The Connacht champions will need a better answer come the replay.

“The Lee Keegan thing was clever and it did hurt us,” McStay said. “But I would be saying to Enda Smith when we settle down this week that he has to enforce himself. He has got to get through that. He is at that level now. He can’t be just pawing around with these fellas. He has to really leave his imprint on the game.

“That is the challenge for him. He can’t be shut out by players like that in a big championship game. Remember Enda was on safe ground. He was the midfielder playing in midfield. Lee Keegan was the one slightly out of his comfort zone, if you like, and he put in a great performance. That’s for Enda to figure out and we will help him as best we can.”

In the first game, Kerry got through their usual quarter-final with their usual minimum of fuss, strolling to a 1-18 to 0-13 win over Galway. Kieran Donaghy performed his own brand of riot in the Galway square in the first half to get Eamonn Fitzmaurice’s side out the gap and though Galway scythed through for four viable goal chances across the afternoon, there was never any sense of a contest breaking out.

Kerry don’t really tolerate that sort of thing at this stage of the summer. They leave that to Mayo. Lucky for the rest of us, the men from the west are unfailingly happy to provide.