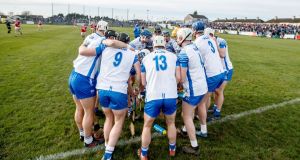 Waterford started their league campaign with a win over Cork. Photograph: James Crombie/Inpho

Strange to remember that Tipp’s All-Ireland started with this fixture when Cork were favourites to win. Liam Sheedy looked half-pleased that Limerick had administered a reality check in Thurles even though it entailed losing the second half 0-5 to 2-10. Sheedy produced a raft of young replacements in the last 15 minutes to give them a run. Cork had a kind of similar experience, blowing an early lead and losing to Waterford. Their performance levels were however dire and Kieran Kingston sounded a bit deflated afterwards. You’d imagine that in keeping with intermittent form, Cork will give a better account of themselves but it may not be enough.

SUNDAY [Matches at 2.0 unless stated]

Westmeath struggled in Galway after losing influential centre back Aonghus Clarke to a first-half red card. Whether it was this deficit or a general flagging, their attack died in the second half in which they managed just two points. Waterford had an altogether more fruitful afternoon dominating most of the match against Cork to overcome the concession of early and late goals. Their application was exemplary and a couple of front liners are due to return for this.

Two Limerick managers in opposition, as Shane O’Neill makes a quick return with his new charges. Their win over Westmeath was notable for Tadhg Haran’s marksmanship but not much else whereas Limerick had an immensely satisfying comeback win in Thurles. John Kiely, like any rational manager in January, was more concerned by the awful first-half display than elated by the second half but they showed enough to suggest they can win this, as the visitors have lost Haran after last week’s scoring exploits.

Dublin have been under the cosh recently, following last summer’s shock championship exit against this weekend’s opponents and the opening day thrashing by what was effectively a Kilkenny development side - just six starters from last September’s All-Ireland final - reduced to 14 after 26 minutes. Mattie Kenny’s side may well be grateful for the home advantage, as Eddie Brennan’s Laois gave a feisty display with Ross King excellent before being out-gunned by Wexford. Expect, however, the combined motivations to have an impact on Dublin.

Colm Bonnar’s Carlow had a dreary afternoon last weekend getting trimmed in Ennis as they struggled for scores. In the championship meeting with Kilkenny they started badly and although they outscored the All-Ireland finalists in the second half, it was too late by then. Kilkenny had an encouraging opener against Dublin, their inexperienced side scoring freely, coping with being down to 14 for three-quarters of an hour and defending smartly with Paddy Deegan leading the way.

Don King couldn’t have done a better job of pushing this as an event built around the rancorous relationship between former team-mates-turned-managers David Fitzgerald and Brian Lohan. On the field they are involved in different projects: the former trying to add some depth to a Leinster winning panel and the latter rebuilding a championship challenge. Both teams had straightforward victories on the opening weekend. It was interesting to see former All Star full back David McInerney playing centrefield for Clare. Wexford were missing a couple of All Stars but looked in good physical shape. Full-on encounter expected.

1 Is it time for the New England Patriots to tear it down and start again?
2 A beautiful, happy accident - Moneyball is the best sports movie ever
3 Nicholas Quinn: ‘Swimming became how I dealt with grief’
4 Reality Bites – Tales from the new normal: Caitríona Cormican
5 Karen Robinson Walton: I am looking at him. I say ‘Benjamin, what have we done?’
Real news has value SUBSCRIBE