More of a direct, expansive style adapted by Galway under new management 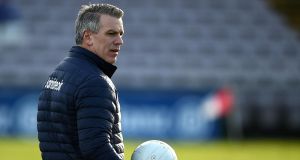 When it was over, Padraic Joyce raised his arms in celebration and the Salthill crowd invaded the pitch. It was tempting to check the calendar to make sure this was still January and not some unseasonable day in high summer. But no. That’s the effect that a riveting, late win over the most obdurate team in Ulster will do for you.

Galway showed flashes of the kind of sparkling football that the maroon county is expecting from Joyce’s reign. But they also found themselves reeled in by Monaghan, the masters of the long game. It took a penalty save on Conor McManus’s shot by Conor Gleeson. Galway’s towering goalkeeper, and a questionable goal clearance on a Christopher McGuinness pot-shot to prevent Monaghan’s late push for glory.

“We shouldn’t have come that tight to be within a point,” Joyce admitted afterwards. “We were a far better team all day. It was hard stopping at the end of it. We were lucky. Conor Gleeson made a great save off the penalty..which baffled me that you get a penalty for tugging a man’s jersey but if it is the rule it is the rule. Sean Mulkerrins cleared a ball off the line and we had two or three goal chances but we should have had more day light between us.”

These hurling/football double bills in Salthill bring about a kind of East/West summit in maroon country. A good section of the support showed up for the hurling and stayed on to see how the Joyce era would start. But the hurling purists scattered as soon as the first game was ended, scattering holy water in their path. And equally, the football-only crowd timed their arrival to coincide with the end of the hurling.

Still, all constituents along with the hearty Monaghan crowd made up an attendance of 7,654 by the time that Galway created the first goal of their league campaign. It came just 15 minutes in and was finished coolly by Robert Finnerty, who stepped out of the hulking shadow of Rory Beggan to slot home. But it was the cross-field ball by Shane Walsh that caught the eye and was indicative of the direct, expansive style adapted by the home team here.

Pushing Walsh into a more advanced position was key to Galway’s game plan. Gone -until the closing passages- were Walsh’s deep forays to collect the ball and the shimmying, jinking runs. Joyce’s thinking seems to be that if you push one of the most dangerous finishers in the game closer to goal, you leave him with no option but to look at the posts.

So it went. Enda Varley was re-cast an old fashioned ball-winner and player maker and thrived in the role. Paul Conroy, back playing serious football after that terrible leg-break in the 2018 Super 8s, was named at centre forward and then parachuted into centre-field when Tom Flynn was a late withdrawal. Mulkerrin had an assured day at full-back and both John Daly and Cillian McDaid were outstanding during the late push from the Ulster men.

But Galway’s depleted reserve of midfielders remains an on-going theme. Monaghan briefly threatened to over-run them in this section but as the game settled, it was Galway who dictated the pattern and tempo.

Monaghan are brilliant at just staying in touch when games are chugging along harmlessly, relying on the brilliance of McManus and the occasional sniped point to keep themselves in contention. It was only when the afternoon heated up and they looked truly interested. They’re a charismatic team, with Beggan intrepidly wandering far, far off reservation to act as playmaker and Karl O’Connell the driving force from centre back.

With Seamus McEnaney back orchestrating from the sideline, there is no danger of the Farney Army becoming bored this season.

Galway used Damien Comer as a strike runner from wing-forward and his incisive burst from the second half throw in created a terrific goal chance for Galway: this time, Finnerty fired too high. But Galway threatened to break the game open but didn’t and were then hit by a perfectly timed burst of scores from Monaghan to level the game. It was then that Walsh began to drift deeper, taking responsibility and lifting his team out of trouble.

“He led as well and ran himself into the ground and took some serious hits off the ball and how the flag up yellow cards for these checks is beyond me,” said Joyce before heading off to prepare for road trips to Kerry and Donegal. Nothing easy.