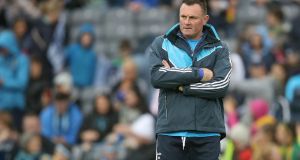 Manager Mick Bohan: “I think every team takes on their own identity.” Photograph: Bryan Keane/Inpho

When Ciaran Kilkenny posed theatrically with ball in hand to signal for an advanced mark at Croke Park last Saturday evening, the new rule’s potential for high drama was apparent.

It’s still not to everyone’s liking, but Mick Bohan for one, Dublin’s skills coach when they won the All-Ireland in 2013, and the current successful ladies manager, has called for patience.

“Obviously the mark is up for discussion. I wouldn’t be as negative as other people seem to be about it at the moment,” said Bohan, the Clare men’s team’s coach in 2016 when they reached the All-Ireland quarter-finals.

“Certainly if you look at the situation with Ciaran Kilkenny’s mark, I thought that was fantastic. I think it should be given a period of time to trial, but what I’ve always loved about our games is the speed of play and I’d hate anything that’s going to slow it down on a continuous basis.

“I actually thought defensively people were much tighter because of it. We’ll probably need a period of time to see how it’s going to evolve.”

Bohan was encouraged by the quality of the opening night fare last weekend.

“I thought it was a great game. Both teams were very open at this time of year, and it’s great when you’re going in and seeing a game devoid of tactics and they’re just going in to play, which is exactly what we want to see.”

The three-in-a-row All-Ireland winning ladies manager will get another opportunity to view Dessie Farrell’s Dublin on Saturday evening. Both Dublin teams travel to Castlebar to play Mayo in their respective National League campaigns, Bohan’s ladies first up at 5pm and Farrell’s team playing at 7pm.

Despite close ties between both groups of Dublin players, it will be an entirely separate experience with no shared travel arrangements or logistics.

“I think every team takes on their own identity,” said Bohan at the launch of the 2020 Gourmet Food Parlour HEC third-level championships.

“For example, our group like to bring their own pre-match meal themselves. There’s very few teams I’ve ever been involved with that would have done that.

“I was really concerned about it at the start because they had to make sure they had ample nutrition for the work that was ahead, but they’ve mastered it.

“All those type of things they’re on top of. Even for All-Ireland finals they want to have their own pre-match meal.”