Sinéad Aherne and Carla Rowe shine in front of a record Croke Park crowd of 50,141 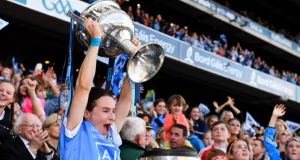 Retaining the All-Ireland Ladies SFC title for the first time, Dublin claimed a deserved five-point victory over Cork in front of a record crowd, in the process banishing any notions of a Rebel final hoodoo over the capital.

A brace of goals from Carla Rowe, one in each half, following a converted penalty from veteran captain Sinéad Aherne, helped the reigning champions to 3-11 to 1-12 win with 50,141 present at Croke Park.

Aherne, racking up 1-7, including 1-5 from dead balls, was the chief scoring threat for the Dubs as she led her side to a two-in-a-row success despite the best efforts of Cork counterpart Orla Finn, who was top scorer for her side with eight points - all from frees.

While the game was entertaining throughout, Mick Bohan’s side held a comfortable lead for long periods and the only time that Cork really looked like threatening the champions’ hopes of back-to-back titles was following Áine O’Sullivan’s fortunate but fine goal finish on 25 minutes.

Having lost out to Cork in three finals from 2014-16 - the first of those three defeats marking a particularly heart-breaking loss after blowing a 10-point lead - this was a sweet victory for the Dubs and firmly dismissed lingering theories that the Rebelettes enjoyed an All-Ireland final jinx over their rivals.

Dublin led by four at half-time - 2-6 to 1-5 - thanks to those goals from Aherne and Rowe - the former coming from the penalty spot, but it took seven minutes for the reigning champions to bag the game’s opening score through an Aherne free. The St Sylvester’s veteran was on the mark again less than 60 seconds later as she blasted just over the bar from close range.

Nicole Owens came close with another Dubs goal chance a couple of minutes later, shooting wide into the Hill 16 end before Cork finally opened their account via a Finn free on 11 minutes. The Rebel free-taker then levelled the match and helped her side to the lead inside the quarter-hour mark.

While Dublin started in a somewhat anxious fashion, being heavy favourites coming into the clash, the momentum of the game changed on 18 minutes as Lyndsey Davey was brought down by Eimear Meaney with the Dubs attacker approaching goal after being worked into a scoring position by a Niamh McEvoy pass. Referee Garryowen McMahon spread his arms to signal a penalty, which was duly dispatched by Aherne.

That score looked to put the Dubs in firm control but a freak error from the otherwise reliable Sinéad Goldrick thew Cork a lifeline.

With McMahon signalling an advantage for Dublin after Goldrick was upended just outside her side’s large square, the defender somehow spilled the ball towards O’Sullivan, who produced a delightful curling finish past Ciara Trant to raise a green flag for Cork, levelling the game at 1-4 a piece.

Bohan’s side remained composed, however, with Goldrick later making amends for her mistake by playing a part in a well-worked team goal, capped by Carla Rowe on 31 minutes.

A follow-up McEvoy point put the Dubs in a strong position at the break.

While the champions were good value for their half-time lead, their defensive approach of sitting deep in an effort to soak up Cork pressure and counter at speed came with risks attached.

Cork, having closed the gap through points from Finn and O’Sullivan on the resumption, came close to bagging a second goal with Eimear Scally’s goal-bound shot stopped on the line by Niamh Collins 10 minutes into the second half.

Dublin jitters were again evident moments later as Aherne skewed a scoreable free off target, although the captain was back on the mark to settle her side and re-establish their three-point lead - 2-8 to 1-8 - by the 43rd minute.

Both sides spurned good scoring chances in the following minutes - Healy failing to pull the trigger when being closed down by Martina O’Brien - but a brace of Finn frees had Dublin’s lead cut back to a single point with just over 12 minutes remaining on the countdown clock.

Just when it looked as though Dublin might rue their failure to take point chances in a vain pursuit of further goals, they finally found the target to raise a third green flag.

Countering at pace once more, another Dubs team move was finished off by Rowe, who slotted the ball under O’Brien following a Davey pass, to put the champions in a comfortable position heading down the home straight - 3-8 to 1-10.

A Finn free with just over five minutes remaining made it a one-score game, but with Cork struggling to retain possession, never mind work the ball goalwards, it started to look increasingly like the game was beyond the Rebelettes’ reach.

A brace of Aherne frees bookended a fine Goldrick point from distance as the champions eased to victory, ensuring the Brendan Martin Cup will stay in the capital for back-to-back years for the first time.