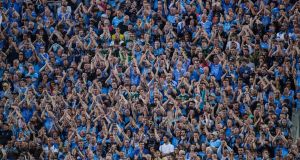 Hill 16 in full cry during the All-Ireland final replay defeat of Kerry last year. Not having the Hill standing sentry in their big matches at the very least disrupts the status quo for champions Dublin. Photograph: Billy Stickland/Inpho

“The sea of green was unreal. There were green jerseys everywhere. I don’t know how they did it but the Limerick supporters seemed to make up 75 per cent of the crowd. I thought I was well prepared for it but in truth it got to me a bit.

“It took me about 10 minutes after we went out to settle and properly assess the thing. We had heard the stories that it was going to be a massive Limerick crowd but this was beyond belief. The noise must have affected our lads and I remember thinking that Kilkenny would be loving it, thinking they were there to spoil our party. If our lads needed any reminder just how big the occasion was, they got it,” – Richie Bennis.

The Limerick manager’s recollection of the 2007 All-Ireland final, as told in his book, A Game That Smiles, sums up the paradox of Limerick’s clamourous support. It had helped to pull them to an improbable appearance on the big day and created an extraordinarily vibrant occasion but the more electricity that sparked, the greater the drain on Limerick’s emotional energy.

The strangeness of this year’s season is most heavily anchored in the empty venues, which renders events almost ephemeral.

During the county championships it was possible to reconcile the disorientation in that club matches frequently attract small attendances and create a sense of detachment.

But the few times I’ve been in a major stadium like Croke Park or Thurles, last weekend’s venues, when they’ve been empty has been to attend media events or practice matches.

Being in a ground amongst media colleagues and capable of hearing the shouts of players on the field feel entirely at odds with activities that have any major importance.

Although each team’s entourage of replacements, management and officials gamely try to support their colleagues and by doing so, inject some atmosphere the stark absence of all of those pairs of hands clapping belies the occasion.

We’re watching a simple fixture between two teams but not a championship contest.

There is great interest in the matches amongst the remote attendance peering at screens as if they were windows back into a world from which we’ve somehow become displaced but it appears like a different dimension.

What though is the practical effect of there being no supporters in attendance?

Scoring certainly increased on the evidence of the first weekend in hurling and, to a lesser extent, the two league weekends in football.

The spectacular totals in hurling were probably multi-factorial – reflecting tactics, competitive imbalance, fitness and conditioning – so it’s too early to say that Gaelic games are following detected trends in other sports by registering higher scores in empty venues. But for the first two winners in the hurling championship to post record points’ totals was notable.

But what about the impact of the absent crowds?

Tom Dempsey, the Wexford All-Ireland medallist, said at the end of the summer that the county would suffer in matches behind closed doors without its loyal and plentiful support creating the atmosphere that drives on the team.

In corroboration The Irish Times hurling analyst Nicky English remembered that when managing Tipperary in the drawn semi-final against Wexford in 2001, the latter’s late comeback, which forced the draw, had erupted out of nowhere and driven the crowd into a frenzy.

In those circumstances the form – Tipp won the replay comfortably – evaporated and English is still convinced that his team wouldn’t have survived another minute. He agrees though with counter-analysis that the same dynamic can work against a team if the crowd’s emotional energy drops.

And that’s the interesting counterpoint of former Limerick hurler and selector Damien Quigley, having been at the Wexford-Tipperary All-Ireland semi-final in the summer of 2019. He felt that whereas the abundant and colourful Wexford support added greatly to the electricity of the occasion, it was also too emotionally responsive to fluctuating fortunes on the field.

That meant that when the match dipped for the Leinster champions, the crowd became uneasy and almost transmitted that to the team.

There has been a focus on Dublin because of the nature of the Hill 16 presence on big days in Croke Park. Yet just as Quigley referenced with Wexford, so Jack O’Connor believed about facing the Dubs.

His view was that all of the prancing around in front of the terrace, as used to be the case with Dublin at times in the 2000s, was a drain on the team’s energies.

Having watched the fiasco of the 2006 All-Ireland semi-final when Mayo ‘invaded’ the Hill End before the throw-in and chaos ensued, O’Connor recalls in his memoir Keys to the Kingdom: “Maybe the Dubs are just different. But this was the day they realised there’s nothing coming back to them from the Hill. Any yahoo can support a team when it is going well.”

Ironically, teams drive support as much as vice versa and that’s why an empty Hill is now a loss for Dublin. In the 2011 All-Ireland final, the Dublin support was whipped up by the team’s late rally and on RTÉ Joe Brolly said that he felt the ground shake when Kevin McManaman scored the goal.

Since then, Dublin haven’t for the most part needed madcap comebacks and their methodical keep-ball, as they probe for openings has engendered a patience or almost serenity in their supporters. They may be tense but that crippling anxiety doesn’t wash down in waves on to the pitch.

Not having the Hill standing sentry in their big matches at the very least disrupts the status quo and who could be more interested in maintaining the status quo than a team looking to win a sixth title on the bounce?