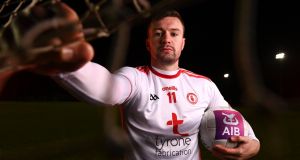 Conor McKenna: “I’ve been lucky enough to come straight back in and score a few goals, so definitely a good start . . . So finally back playing the sport I love, and it’s great to be back into it.” Photograph: Sam Barnes/Sportsfile

Six years ago Conor McKenna left home as one of Gaelic football’s most promising exports, and after just two games for Tyrone since his return he’s already looking like the most promising import from Australian Rules.

At 24 his senior inter-county career may only be getting going, although either way McKenna has no regrets; after six seasons and 79 appearances for Melbourne side Essendon, everything about his return appears perfectly timed.

After scoring 2-2 against Mayo on Sunday, plus 1-2 against Donegal the previous week, he’s now a key player for Tyrone as they face Donegal again in this Sunday’s Ulster championship knockout showdown.

As much as he juggled the success and homesickness during his time away, nothing – including no amount of money – could make him stay any longer.

“I never enjoyed going back anyway,” he says. “After Christmas, or whenever, but this year I just never got to that stage, in one session just walked off crying, just wanted to go home, the money alone just wasn’t enough to keep me there.

“The club knew that too, so it was never a shock to them when I did retire, it was only a matter of when. They tried everything to make me happy over there, but it just didn’t happen, I had to come home for my own sake.

“But no regrets, no, and I’d still advise any young fella from Ireland who has the opportunity to go over to the AFL to 100 per cent try it. It’s something I will look back on and I’m proud of what I’ve achieved, but happy I’m home too.”

Though contracted until the end of the 2021 campaign, his exit was probably hastened a little when McKenna was the first AFL player to test positive for coronavirus, which later came back negative, although by then he found himself subjected to plenty of negative comments.

“In Australia, when you’re not going well, the fans will certainly let you know, there’s plenty of social media. So I got used too that after my first few years in the AFL. In professional sport, you always cop a bit of that, being told to go back home to Ireland, that’s something I actually enjoyed, didn’t have much impact on me to be honest.

“You only really listen to the family and close friends, and that doesn’t matter if you’re going badly or going well. I just focus on what I can do. But GAA players get just as much media attention, and I tried to explain to the club, we just played for the love of it.

“I’ve been lucky enough to come straight back in and score a few goals, so definitely a good start, and something I’ve really dreamt about the last six or seven years, being over the AFL, and not really enjoying it. So finally back playing the sport I love, and it’s great to be back into it.

“I was back for a week or so, then one of my family members had Covid-19, so I had to isolate for another couple of weeks, so I was just back a week before the Donegal game, so got back into the swing of things quick enough.

“Everyone said my fitness would be far superior, a different level, but since I’ve got home I’ve got a bit of a shock at how fast Gaelic football is, how the game keeps moving. It’s non-stop, there’s no walking, and that’s actually something I struggled with, But I always knew it was my last year, I simply wasn’t enjoying the AFL anymore.”

Latest news that a Tyrone player has tested positive for Covid-19 ahead of their Ulster SFC opener against champions Donegal is being digested within the county in advance of the Donegal showdown.

But McKenna told BBC Sport that no-one else in the squad has had to self-isolate as a result of the positive test.

“Obviously it’s disappointing for the player involved but for everyone else in the county it shows the protocols are working,” he said. “I suppose you would expect someone to get it the way things are going.”

1 Keith Duggan: Through the glories and the disgraces, we were all Maradona addicts
2 Diego Maradona dies of heart attack, aged 60
3 Handful of God: Five magic Maradona moments
4 Darragh Ó Sé: Cork and Donegal went out with the wrong attitude
5 Andy Farrell to delve deeper into Irish squad for team to play Georgia
Real news has value SUBSCRIBE