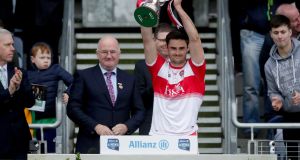 One of the consequences – for all we know, intended – of the decision to fix the discussions on a graded football championship for an October special congress is that it has got a lot of coverage.

This is understandable from a national media perspective. Beggars can’t be choosers and if Tier 2 is the only game in town, we’ll play.

It’s worth emphasising ‘national’ media because counties are currently in the throes of their own championships and, in a few cases, managerial intrigue and so have plenty to talk about without agonising over secondary, inter-county football activity.

Aside from the obvious reasons for people around the country not to be getting carried away with ‘this weekend’s events in Cork’ (as we will alluringly call them), there is also a pretty unavoidable reality. That is that even those benignly disposed towards the Tier 2 initiative are equally underwhelmed by the prospect.

For a number of counties, it makes no difference because they won’t be troubling the Tier 2 schedules any time soon and indications are that a good few of them are willing to let the affected units have the main say in the matter.

This is the difficulty. There are those counties for whom a mezzanine achievement like a Tier 2 championship would mark progress and be a welcome stage in their evolution but there are others for whom it would represent a source of unrelenting gloom.

There are also those, like the handful of permanent or semi-permanent Division Four residents, for whom winning it would represent nearly as much of a pipedream as taking home the Sam Maguire.

So it is difficult to identify who is chomping on the bit to get involved. In other words is Tier 2 an opportunity or the spectre of hard times? Like much else in life and the GAA, this a grey area.

The obvious drawback to involvement in the competition – the Adlai Stevenson Cup, or whatever it ends up being called – is the loss of possibilities. It is hard to exaggerate the effect of the aspirational on counties as they line up for the summer.

It was best expressed in a private conversation with a now retired, formerly prominent, player who said that memories of and hopes for big days are what sustains teams and players, all of whom are aware of – and largely resigned to – their limitations.

Former president Aogán Ó Fearghail said at the launch of Dublin club Cuala’s strategic plan a couple of years ago that his own club Drumgoon when they dreamed of winning championships, were talking about fixtures and not titles.

Counties, too, never forget. Waterford beat Kerry in the 1957 championship and it still inspires them to imagine that it might happen again. The 2003 under-21 Munster final would have nourished the thought and although it must appear as incredibly thin rations for counties who win things all the time, it continues to act as a beacon.

That is the underlying problem with Tier 2. All the logic in the world points to it as the obvious way to proceed and give more counties a meaningful chance of winning something but the One Fine Day theory undermines that process; it’s easier to fantasise about winning the lottery than to take a second job.

Complicating things for the proponents of Tier 2 is that, unlike hurling, every county in the GAA has a One Fine Day on file somewhere.

Part of the problem is the intensifying demands of participating in inter-county football. Virtually every county expects standards of fitness and discipline that were unheard of, even in the relatively recent past. That commitment makes it harder to sell to players the predestination at the heart of every inter-county footballer’s existence.

Yet you can’t fake the rapture of winning major prizes. It has been pointed out that the GAA already has a perfectly functioning tiered competition, called the national league.

It has its own divisional finals every spring and they are played at Croke Park but hardly anyone goes to them even though they generally always represent the best chance a county has of lifting silverware in a given year.

Give the same county, however, a shot at winning a championship match against neighbouring rivals and there’ll be a crowd.

Attitudes take time to evolve. The All-Ireland qualifiers started off as a curiosity and in the early days Tipperary actually scratched a fixture but they quickly became a better environment for One Fine Day activity – freed as they were from the stifling oppression of provincial relationships, as played out over a century or more – than the provinces.

That however is to be taken away from the Tier 2 competitors and will delete those particular ambitions from counties who may have had a comparatively upbeat championship exit.

It’s not entirely new. A decade ago it was proposed that Division Four counties be diverted from the qualifiers into the Tommy Murphy Cup, the most recent iteration of Tier 2.

When the proposal to test-drive it was passed by congress, it eventually provoked the usual drunkard’s remorse when the implications set in – I’m very sorry but I can’t remember what I was doing – and after a lucid interval of two years, it was quietly dropped.

On the face of it Tier 2 suffers from the same difficulties as most championship reforms. Most people agree that something needs to be done but there is no consensus around what they actually want.

The idea may well get a fair wind at the weekend’s special congress but the only way it will thrive is if the involvement of the eligible counties is sincere and enthusiastic – which is far from guaranteed.