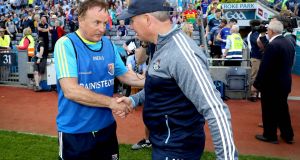 The Leinster football championship is “over” according to former Longford manager Dennis Connerton.

He was speaking in the context of the draw for next year’s provincial series, which pitches the county against Louth and which for the first time deferred its semi-final pairings until next summer when the last four teams emerge.

This is intended to create a bit more excitement about the championship and also avoid dispiriting teams, who might find themselves in the same side of the draw as Dublin.

Connerton had that experience in 2018 even though Longford got to the semi-finals on the back of a memorable win over Meath in the quarter-finals. He acknowledges Dublin’s quality but believes the All-Ireland champions’ domination of Leinster has shone a light on the inadequacies of the format.

“Leinster has become a lame duck,” he said.

“It doesn’t seem to exist anymore as a provincial championship and you’d wonder how long more we can keep going with it. Apathy has set in. Dublin are fabulous footballers and a fabulous team but it’s just very difficult for others to reach that level.

Setting out the difficulties of facing the county that next year will be in pursuit of a record 10th successive provincial championship, he said that the only prospect of making an impact is if the two teams’ performances deviate significantly from the norm.

“Well there’s two sides to it and one is the challenge of playing probably the greatest team of any era and the other part is, ‘what chance do we really have of beating these guys?’ That’s very difficult for teams to process.

“What you’re hoping for all the time is that Dublin’s level of performance is going to dip, which it never seems to do at Croke Park, and a massive dip at that and that you’re going to play the game of your life.”

There is he believes a major discrepancy between the horizons of a county like Longford at various times of the year.

“When you’re setting out, you have the pre-season tournament, the O’Byrne Cup. That’s something you can chase after (Longford beat Dublin in the 2016 competition) and you look at the league, which is where it’s all happening for teams in Division Three, Division Four, Division Two. You’ve an opportunity of winning something.

“But then you’ve the Leinster championship and what are you doing? You’re waiting to go in to the qualifiers. It’s only a matter of how far you get or when you’re going to bump into Dublin.

“You can handle everybody else – there is a level of expectation that you can compete with the Kildares and Meaths but Dublin is a different animal altogether.”

Connerton, who stepped down after the 19-point defeat by Dublin in the 2018 Leinster semi-final isn’t exaggerating about his county’s exploits. As well as beating Meath in 2018, Longford under his successor Pádraic Davis, took Kildare to a replay in this year’s championship.

It is however, as the former manager acknowledges, when the county is given the chance to slip the shackles of the provincial championship, which it has won just once in 1968, that it performs best. Longford’s record in the qualifiers is impressive with several wins over teams with higher league rankings.

“I’d say our players look forward to the qualifiers because they don’t know who they’re going to meet and have done well in them. I can put any spin on this that I want in any meeting with players but they probably feel themselves that if they can keep Dublin to single digits, they’ll be doing very well.

“Once you’re not putting up with the 30-points or the 28- or 29-points defeats, you’re coming out unscathed and that’s where it’s at.”

He’s pessimistic about the prospective Tier 2 championship because he doesn’t believe that it will generate much profile.

“The players aren’t going to play in another Tommy Murphy competition. It would be an insult to expect that. You have to give them something presentable and something decent.”