Jackie Tyrrell: Battle for middle ground will decide who stands out from the crowd 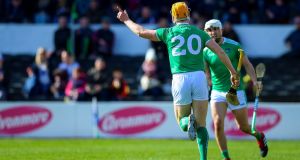 During the week I tweeted a picture I took during the Limerick v Dublin semi-final last Sunday.

It came after Kyle Hayes caught a puck-out, leading to a passage of play that lasted about 30 seconds and ended with Darragh O’Connell winning a free for Dublin when he was gang-tackled by three Limerick players. I hit the button as referee John Keenan put his hand in the air and I was able to count 20 players in the middle of the pitch, between the two 45s.

Of those 20, 18 are between the Dublin 45 and the Limerick 65 and one of the two Limerick players who isn’t has only just crossed it on his way back from the fray. So basically, for that passage of play, 19 players out of 28 were jammed into a space on the pitch that only covered around 40 metres of Nowlan Park.

I took the photo because it wasn’t an isolated incident. That many bodies condensed into one area made for a very strange sight and one I wasn’t used to seeing. It meant that both teams had two players each in either half who weren’t scrapping for possession in the middle of the pitch.

This was a recurring theme and a trend in both games on Sunday. As I watch club and county games, I constantly try to predict to myself the next trend in the hurling world. The game evolves all the time so what’s coming next?

At half-time on Sunday, I looked at that picture and said: “There it is, staring you in the face”.

The game is ever-changing and evolving. You need to be always looking and trying to match what is being done by the best teams, then tweaking the tactics to play to the strengths the talent in your own panel. If you don’t, you’ll be left behind.

Dropping people into the middle third has been in the game for a number of years, especially with deep-lying wing forwards. But this is more than that. It’s more extreme now and more deliberate. What you’re looking at is whole half-forward lines and whole half-back lines plus an inside forward and his marker all following the dropping ball to get in around it when it breaks.

On Sunday, the message was simple – flood the middle third, win the ball by having a numerical advantage in the area of the field, work the ball in triangles from there. The idea then is to get the best player in the best launching position who can look up and play a killer ball into pockets of space in front of goal for the inside men.

Sounds simple but, in reality, a lot of precisely-executed skills have to be performed repeatedly for this to work. It’s not enough to be physically strong around the middle. You need to be quick and sharp with the pick-up, you need to be aware of your surroundings and able to get a pass away with up to five or six bodies closing on you. You need to be calm under pressure.

For it to work you need an animal work-rate to win dirty ball, with a high volume of players occupying this area. Next you need a really good half-back line to distribute the ball to the inside forwards. For the strike forwards left up there, off-the-ball running is the key.

I count 20 players between both sets of 45s in yesterday’s game, seems to be the way forward..... pic.twitter.com/InYnGERpWT

They need to run laterally and be patient to create the space, they need to time their run to secure possession out in front. After that, it’s either shoot or lay-off to a runner coming from midfield.

If you can be the team that repeatedly emerges from the fight in the middle with the ball, the advantages are huge. Straight away, you’ve created space in the two most dangerous areas of the pitch. All the bodies that have been sucked into the centre of the pitch aren’t getting in the way of either your inside forwards or the player striking the ball into them. It won’t always be perfect but when it works, you will have your best forward in possession 20 metres from goal, usually one-on-one.

For a defender trying to play against this sort of system, the problems are endless. It’s hard enough to keep tabs on the best forwards in the country at the best of times – try doing it when there’s only you and him alone with a quarter of the pitch to cover off.

You have to be hugely mobile to track a corner-forward running across the 21, running in behind you and then suddenly darting into that pocket of space. Aaron Gillane is excellent at it. I doubt I’d survive in that sort of game now. I joked to John Mullane on Sunday that I’d be in trouble. He laughed and said I’d need a defibrillator after 20 minutes.

Most teams are playing some version of this now and you are seeing more and more forwards back fighting for ball in areas you wouldn’t normally find them.

Galway do it with Joe Canning and Conor Whelan, Kilkenny had Liam Blanchfield back clearing a ball against Wexford. Waterford have a slightly different twist on it in that they rotate their wing-backs and wing-forwards seemingly at will but it’s essentially the same thing.

Limerick are the market leaders. You only had to watch their brilliantly-constructed goal on Sunday to see how it can work at its best. Nickie Quaid landed a puck-out on the Dublin 65 and as Peter Casey came out to meet it, players came from all around to join the scrap.

It was over by the right sideline so by the time Jake Malone got the ball up into his hand, you had 10 players packed in a square made by the two 65s, the sideline and the midfield mark. Three different Limerick players got a contact on Malone and hampered him making a good connection, leaving Seán Finn to come out from full-back for Limerick and collect a handy ball just inside his own 45.

This is where the real test and worth of the bunching tactic kicks in. You’re only as good as the players you can get in space. Finn came out to the ball with his head up and straight away he played a crossfield ball to Diarmaid Byrnes, one of the best strikers of a ball in the Limerick team. Byrnes was in space between the 45 and 65 so he had time to look up, set himself and ping a 70-yard ball down on top of Cian Lynch who had made his run to the Dublin 20-metre line.

Lynch plucked a great catch out of the air with the back of his hand and he was hardly even back on the ground before he was looking up to see where the next Limerick runner was coming from. Nobody in the Dublin defence had noticed Séamus Flanagan’s run.

The Limerick substitute was out around midfield himself when the original puck-out came off Casey but when Byrnes’s ball was in the air heading for Lynch, he was crossing the 45 and bursting himself to get into the danger area. His blindside run took him behind the Dublin full-back line and Lynch picked him out with a peach of a pass.

It was a gorgeous goal. Three stick passes zig-zagging their way up the pitch might not sound like much but the real genius lies in the two elements that made it possible. First, the bunching in the middle and the hurrying of the Dublin player to force him into a bad strike, meaning now Limerick had players in space with time to work out what to do. And second, most crucially, a massively high skill level to execute it from there.

Who does this suit? The really skilful, highly-conditioned teams. If you can’t compete in this facet of the game well then you will struggle to survive. You will have no oxygen, no foothold in a crucial area of the field, no real possession or penetration.

Worst of all, you have no choice but to try and just get better at it. It forces you to play the game on those terms. There is no clever way around it. If you go long over the middle third, their half-back line will just drop back to pick up the breaks from the full-back line. If you try to play through the lines and pick your way through the middle third, you have 20 bodies to get through before you see daylight. You have no choice but to get down and dirty and try to win those battles.

It is very interesting to watch it develop, asking fresh questions of players and management teams. It forces players to be really clinical with their first touch, positioning and movement.

It’s made for the likes of Jamie Barron, Cian Lynch and Cathal Mannion – guys who have those elite skill sets, brilliant balance, intelligent movement. The initial phase, when it is all-out war in the trenches, puts a premium on bulk. But once the ball comes loose, it’s the thinking hurlers with the best touch who will prosper.

These are the terms and conditions that the league final will be played under. For the rest of the year, you need to engage in nailing this or you will be enjoying the Galway Races for all the wrong reasons.

Anyone with designs on the All-Ireland has to excel at this, meaning the middle third will be the launch pad for some teams and the graveyard for others.

Championship starts in six weeks. Now is the time for each county to decide which camp they’re going to be in.