Remote GAA annual congress likely to be a limited affair

Retaining the football provincial championships remains a priority for many 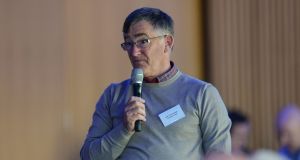 John Prenty: “If we agree on a split season that would be a major decision to emerge from the fixtures’ review”

With pandemic restrictions looking increasingly likely to reduce the number of important decisions taken by next month’s GAA annual congress, radical choices for reforming the football championship are probably going to have to be deferred.

One influential voice believes, however, that the priority should be to agree the concept of a split season, as organised in 2020 and again this year, with county going first in a reversal of last season’s format.

Connacht CEO John Prenty, who is a member of the Fixture Calendar Review Task Force (FCRTF), which has proposed four options, including the “four eights” – standardising the four provinces into eight-county units by shifting teams based on placing in the national league – and a format completely based on the league, which would be played in summer, believes that the ideas would be best deliberated on with conventional congress attendances.

“I think major matters might be shelved until we can get a proper congress. There are a couple of decisions that can be taken in a few weeks, one of which is I’d say that we should have a split season. If we had that then you can plan a season for next year and it doesn’t matter immediately what the format is going to be.

“If you don’t have the basic structure of a split season you don’t even know how you’re going to organise the following year. In the current pandemic you’ve no choice but it needs to be set in place if we’re proceeding with it next year.”

Remote meetings have their limitations, and with reduced delegations and the difficulties of conducting debate amongst people not in the same room there is a reduced appetite for a traditionally-sized motions list.

For instance, this year’s Connacht convention takes place tonight (Thursday) in remote session and has an accredited attendance of around 40, less than half what would usually be the case.

There is not any great urgency for the GAA to make up its mind on what precise format to choose as it would not come into force until 2022. Originally the proposals of FCRTF were launched in December 2019, and had been due for debate as a special congress last September, which was ruled out by the Covid crisis.

The task force is the initiative of association president John Horan, whose term of office concludes at the coming congress, with Larry McCarthy taking over.

Prenty feels that whereas this might create a greater desire for the matter to be addressed, there is no pressing need to do so.

“There are two issues. One, this is John Horan’s last congress and it was his idea to put the fixtures review group together. It would be good if he could see that over the line, but the most important thing in my view is the issue of splitting club and county seasons.

“Everything else can be added later. If we agree on a split season that would be a major decision to emerge from the fixtures’ review.”

Consultations have been ongoing and the ideas in the final report of the task force were “road showed” at the end of last year ,whereas earlier this week county managers discussed the potential changes.

While there is an appetite for change, retaining the provincial championships remains a priority for many, a view that Prenty believes will have hardened after last year’s historic breakthroughs saw Cavan winning Ulster for the first time in 23 years and in Munster Tipperary claiming a first provincial crown since 1935.

“It appeared to be leaning if anywhere towards the four ‘eights’ because every team would have a chance to win their provincial title,” he said of the briefings organised last year.

“Trying to change that in 2021 may well prove problematic after Cavan and Tipperary’s achievements last year.”