Nicky English: Galway have to show that there are no chinks left 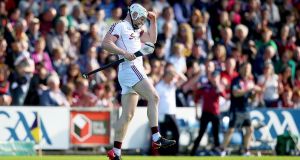 Joe Canning: has been in impressive form again this year in a potent Galway attack and will most likely cause problems for Kilkenny on Sunday. Photograph: Tommy Dickson/Inpho

As a preliminary point, I would repeat that I can’t see why both of these provincial finals can’t be played on separate days. There are so few big hurling fixtures left and a lot of people would like to see both.

I haven’t missed a Munster final in years but having seen all of the Munster teams in action, the big issue for me this weekend is whether Galway are the stand-out team they’ve looked to be in the round-robin matches so far. Or is the league form that I found concerning still an issue, even under the surface?

On last year’s displays, Galway had to be favourites for the All-Ireland and after that uncertain league campaign, they appeared to be hitting the 2017 standard when beating Kilkenny and Wexford. In hindsight, both counties were on their third week, which has been seen to have an impact on all teams – even Galway’s form dropped against Dublin although as that was a dead rubber, it’s hard to be definitive.

Either way, on Sunday we get to see where Galway are. A year ago they beat Wexford in the Leinster final but they have relatively little baggage with them whereas Kilkenny have been a struggle for them in recent times.

Galway are coming into this as the geographical outsiders to play Kilkenny on what is essentially their patch in Croke Park and in a Leinster final, which is traditionally their domain. What interests me most about this weekend is Galway’s ability to confirm the Salthill form.

On the available evidence Kilkenny aren’t good enough to win this. They were lucky to beat Dublin and, while competitive against Galway, never looked like winning. But they will be comfortable that they belong in the final and playing the All-Ireland champions won’t faze them in the slightest.

By force of circumstances they have ended up with a 20-man panel, which came to suit the round-robin format. They’ve started the older, more experienced players some days and the younger lads on others. They’ve delivered but in fits and starts and are very reliant on TJ Reid – but who better to be reliant on; he’s the best.

They’ll play until the finish and if there’s any chink in Galway’s psychological armour, they’ll find it.

After the relative free-for-all of the Wexford match – with Pádraig Walsh tearing up the pitch for scores nominally from full back but in the tactical context of the sweeper system – Kilkenny will find Galway a more orthodox challenge, which will actually ask more questions.

Galway have a physical defence – at times too physical and Daithí Burke needs to tone it down because I’d be surprised if he got away with what he did in Salthill, in Croke Park – and a fair degree of skill with Pádraic Mannion continuing to excel. David Burke also brings quality to midfield behind a very dangerous forwards’ unit.

Joe Canning is playing very well, Conor Whelan’s developed into a serious threat at corner forward and will test Paddy Deegan or Paul Murphy to the limit. Conor Cooney poses a different proposition for Walsh than a roving Wexford full forward.

It won’t make a huge difference to Kilkenny if they lose but for Galway not to win will have major repercussions for the championship. There’ll be blood in the water and every county left will be aware of and buoyed by that.

I think however that they will win.

It’s not dissimilar in Munster although on one level it shouldn’t matter to whoever loses in Thurles, particularly when you look at the horrendous record of Munster champions in the All-Ireland series – eight semi-final defeats in 11 years.

I had no hesitation in going for Cork to beat Clare in last year’s Munster final or in last month’s round-robin match but I think Clare are on an upward curve and it’s more important for them to maintain that against a Cork team that for me has stalled since half-time against Tipp.

What happened in Thurles when they came late to beat Tipperary was a huge validation for Clare players and affirmation for Gerry O’Connor’s and Donal Moloney’s management. It showed at last that they had learned how to win close games and signalled a rediscovery of the 2013 form.

It also heralded a break with last year’s tendency to overanalyse the opposition and instead focus on what they can control internally.

The questions raised about Galway in Leinster also apply here. Clare played Tipp on their fourth week and were at home to Limerick on their third. That has to place an asterisk on their form.

Peter Duggan and John Conlon have become incredibly important to Clare. In last year’s Munster final and to an extent in the Tipperary match earlier this month we saw a lot of wastefulness around midfield, which led to their not utilising the full forwards despite Conlon being unmarkable this season.

Instead they were driving wides and in the first match, despite having plenty of ball, Shane O’Donnell and Conor McGrath didn’t take the chances and I was at one stage staring at the scoreboard wondering how on earth they weren’t ahead. It fitted in a familiar pattern: overelaboration in the forward line and undisciplined shooting from out around midfield.

The Tipperary win transformed them. They were much more direct against Limerick – much more ‘at it’ – and you could sense the relief in Clare’s play, the lifting of inhibitions that have undermined them since 2013.

They will need not to repeat last year’s mistake of conceding the Cork puck-out, which we have seen is entirely manageable – by Waterford in last year’s All-Ireland semi-final when it was torn asunder.

This was confirmed last month by Tipperary who when they conceded it in the first half made Cork look unstoppable but when they hunted it down in the second half, bridged a nine-point deficit and should have won.

Clare need to push up and be less wasteful – 16 wides in last year’s Munster final – and bring Conlon into the game. If they have one major improvement this year, it’s Peter Duggan’s free-taking, which has been exceptional and kept them in games.

I honestly didn’t see Clare as contenders this year but if they maintain their current course, I’ll have to reassess that.

Drogheda United to rename home ground to highlight mental health campaign 08:00
Chelsea condemn Liverpool to latest defeat; Gordon Elliott hearing to begin 07:37
Walk tall, golfers, and tell Leo that golf is not the enemy at the gate 06:35
Mick’s millennium: McCarthy clocks up his 1,000th game as manager 06:00
The interpros give players a chance to prove the coaches wrong 07:09