GAA Statistics: How Peter Duggan has transformed this Clare team 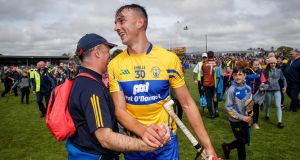 In Clare’s last championship match Peter Duggan took 15 shots and scored 0-13. He hit the post, forced a brilliant save from Nicky Quaid, scored two points from play, a ‘65’ and 10 frees.

John Conlon has been in sensational form for Clare but their big number 10 has transformed the team that will take to the field in Sunday’s Munster final from inconsistent to efficient. A development he has, at the same time, undergone himself.

In the three summers previous to this year’s Championship Clare have managed 58 points from placed balls in 10 matches. Tony Kelly scored 55 per cent of them, Colin Ryan (who was retired for the 2017 season) scored 21 per cent of them, David Reidy managed 12 per cent, and the rest were via Conor McGrath and Cathal O’Connell.

In comparison, Joe Canning alone managed 86 per cent of Galway’s placed balls (Conor Cooney and Jason Flynn took over infrequently when Canning was struggling with injury). Patrick Horgan has scored 87 per cent of Cork’s placed balls. Clare, who won only four of those 10 matches, have lacked a consistent free taker. In 2013, when they won the All-Ireland, all but 0-1 of their placed balls came from Colin Ryan who finished that summer with 0-62 (from placed balls) in seven matches.

Peter Duggan made his Championship debut in the 2013 Munster quarter-final win over Waterford, coming on as a 29th minute substitute, and departing the fray again in the 69th minute. That was the Banner’s first victory in the Munster senior hurling Championship since 2008.

Two months earlier Duggan had won his second of three All-Ireland Under-21 titles. Although he started and finished two of those finals (coming on after 49 minutes in the first), he never registered a score in any. Cathal O’Connell was on free-taking duties in the first two, with Bobby Duggan taking them when the Banner completed three in a row in 2014. This season however he has nailed his place on the Clare team, as their free-taking right-half forward.

Clare began this summer’s Munster round-robin series with a defeat to Cork. Duggan came in off the back of a league scoring average of 0-9 per game (and before that an impressive showing in the Fenway Classic in Boston, and a very strong club campaign in reaching the county final with Clooney-Quin).

Duggan himself scored 0-4 against the Rebels, slotting four of a possible five frees. He was replaced after 57 minutes after only touching the ball once in the second half (there was a lengthly injury delay). While he only had six involvements in general play in the first half.

Clare stuck with him for their win over an injury-stricken Waterford and he responded with 1-10 (all placed balls).

It wasn’t until the county’s win over Tipperary however that Duggan began to display the leadership and quality in general play which has changed Clare’s season. On first impressions the powerfully built attacker can appear leggy and casual, but he is explosive over short distances, relishes the physical exchanges and has excellent vision and bravery allowing him to drop deep, contest and lay the ball off in the tackle.

Against Tipp his last minute point (from play) leaning back on the right sideline certainly caught the attention – a moment which could prove to be defining in his Clare career – but he impressed too with his ability to twice put his body on the line to win frees and on another two occasions win scrappy breaks. Against Limerick he made a block in his halfback line and against the Deise he won seven 50/50 encounters.

The Limerick match which followed was his best yet, and still just his 12th Championship appearance and eighth start (before this year he had only scored 0-5 in eight appearances, in contrast to an average of 0-11 per match this year).

So far this summer he has scored 1-42 in four matches (0-4 from play), improving game upon game both in general play and in his free-taking duties. And of the teams remaining in the championship he is the top scorer (Tipperary’s Jason Forde has scored more).

Without Duggan, Clare looked like being ground down in any close encounter. With him they look the opposite. He has an accuracy rate of 86 per cent from placed balls so far in the 2018 Munster championship (37/43), and in the past two matches that’s risen to 92 per cent. If he can continue his rate of improvement the Banner will take beating, and not just in Sunday’s Munster final.

1 World Rugby study advises removal of reset scrums to reduce Covid-19 risk
2 Sideline Cut: Vignette shows why Bird is the true shark in The Last Dance
3 Ken Early: Liverpool fans, Bamber Gascoigne and a close shave in Istanbul
4 Coming fourth in the Olympics didn’t change this fearless quartet, time did
5 As news gets better, can the pull of The Field be resisted?
Real news has value SUBSCRIBE