Nicky English: Confident Clare have stepped up a gear 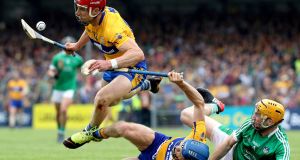 Home advantage has proved a significant and consistent factor in the new championship format.

Clare were the only team in Munster to win away – last week in Thurles – and in Ennis they have traditionally been difficult opponents. They would perhaps have been within their rights to feel a bit slighted by how hotly fancied Limerick were coming into this match.

The win over Tipperary the week before has done a lot for their confidence because they were impressive at Cusack Park.

I’m not sure if it was the third match in a row that affected Limerick so badly – it has certainly affected most other teams having to do it once it became clear that it wasn’t a coincidence – but their form was poorer than their previous displays.

There was a carelessness about Limerick. Within the first five minutes Shane Dowling had missed a free in front of the posts and he didn’t appear to place it, just threw it down. Then Nickie Quaid pucked out to Diarmuid Byrnes, who caught it standing over the sideline and Séamus Flanagan lost a ball also over the sideline.

Their game never really recovered from the early stages when they looked off-form even though, being four down with the wind advantage to come, John Kiely must have been happy enough at half-time.

They weren’t able to make inroads on the scoreboard and seemed to be four behinds for ages. No matter when they scored, Clare hit back, often immediately.

David Reidy was hard done by for the red card but it didn’t have much of an impact. The damage was done for Limerick when Seán Finn had to go off even before his replacement, Tom Condon got dismissed.

Clare coped better with the 14 men. Tony Kelly had plenty of space in which to move around and John Conlon exerted pressure throughout as Limerick really struggled with his ball-winning.

Colm Galvin was also much improved on last week and the Clare midfield were superior. Cathal Malone had the better of Cian Lynch, who has been such a stellar influence for Limerick but who looked off-colour here.

It was a surprise for me when Graeme Mulcahy made way for Richie McCarthy at half-time. I understand that John Kiely wanted to restore the balance between the attack and defence but Shane Dowling doesn’t have the mobility to play that role in a reduced attack whereas Mulcahy and Séamus Flanagan did it brilliantly against Cork in the draw in Páirc Uí Chaoimh.

It was noticeable though that their bench options in defence featured names like Tom Condon and Richie McCarthy who have been around for a quite a while, suggesting they maybe don’t perhaps have the same type of strength-in-depth as previously thought.

If they lacked mobility in attack, they were also up against a seriously impressive defence. Pat O’Connor, David McInerney and the ever-improving Jack Browne were extremely comfortable in a formidable unit.

It doesn’t have to be a major setback for Limerick. They’ll play the McDonagh Cup runners-up and will almost certainly be in the quarter-finals in Thurles, a ground they’re well accustomed to, against the Leinster runners-up.

Clare deserve to be favourites for the final. They have got better all the time since losing narrowly enough to Cork in Páirc Uí Chaoimh and on a head-to-head they have been more impressive whereas Cork haven’t shown that level of improvement.

With their confidence back and three good showings in recent weeks, they look as if they’re finally starting to deliver again on the promise of 2013. When compared with Limerick, they are able to match and surpass their experience. They won even more under-21 All-Irelands and have the confidence of that Liam MacCarthy success.

It’s been an annus horibilis for Waterford with all of their injuries and not having any home matches, which we’ve seen have been such a major advantage. On their last weekend they were able to hurl with abandon and possibly made it unexpectedly difficult for Cork.

At the end of the first year of the new system, I think it’s been a fantastic success but still could do with a couple of tweaks. There’s no need to rush into it but a rest week would help with the problems we’ve seen for teams playing multiple weeks without break.

It may be coincidence but three of the four teams who have had four matches one after the other will now play no further part in the championship. Only Wexford survive and they didn’t make the provincial final.

With respect to the McDonagh Cup finalists, who will play Limerick and Wexford in preliminary quarter-finals, there are only four top hurling weekends left this championship. I’m not sure that’s enough at the height of the summer.

Colin Kaepernick’s exile is too fresh for NFL to speak out on US protests 07:00
1913: The year the GAA really started to get its house in order 06:00
Ken Early: Champions League has stolen international football’s clothes 06:00
‘A radical departure’: Who are CVC and what are their aims with rugby? 06:00
The strangest fishing club in the US and the huge pike that bit a schoolboy 00:00
Crossword Get access to over 6,000 interactive crosswords