Forward’s goal in added time ends hopes of Letterkenny IT 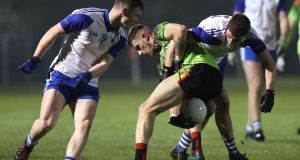 The fist of Adam Steed was enough for Carlow IT to earn a place in their first ever Sigerson Cup final over Michael Murphy’s Letterkenny IT.

The half forward got on the end of a centre from Cian Farrell deep into injury time in Páirc Grattan, Inniskeen.

The game was a slow burner for the majority. Farrell was the exception – the young Offaly forward was the game’s most impressive forward and landed three first-half points. Despite Farrell’s efforts, Letterkenny would lead 0-5 to 0-4 at the turn.

Donegal county midfielder Michael Langan singlehandedly dragged his team into contention with his ball winning and placed kicks and he put his side 0-8 to 0-6 ahead with a quarter of an hour to play.

Momentum then swung in Carlow’s favour when Letterkenny lost Darragh Black to a red card and Mark McAteer with a black. With a numerical advantage Evan Lowry found the net to spark a unanswered sequence of 1-4.

Marley thought he had secured extra-time. Farrell and Steed had other ideas.