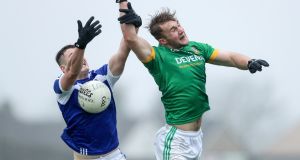 Meath manager Andy McEntee has claimed that the new advanced mark rule in Gaelic football is unnecessary and only moving the game closer in style to Australian Rules.

Two Meath players were awarded advanced marks during Saturday’s 4-16 to 1-15 O’Byrne Cup demolition of Laois but opted to continue playing on both occasions.

It was a round three game in Navan ironically watched by local star and county title winner Conor Nash, who was snapped up by Hawthorn in late 2016 and is now established in the AFL.

All Star Tyrone forward Cathal McShane has been strongly linked with a move Down Under too, potentially joining Dubliner James Madden at Brisbane Lions.

“I’m not a fan of it,” said McEntee of the advanced mark rule brought in by a special congress in October. “I see more people going over to Australia and [it’s like] we’re just trying to make it a little bit easier on them. I don’t get it.”

Asked if he felt the new rule provides a shop window for AFL scouts to assess potential talent, McEntee shrugged.

Meath’s 10-point win over Mike Quirke’s Laois counted for nought in the overall competition as Westmeath beat Louth 1-13 to 0-11 to grab the last semi-final spot.

Westmeath will play Offaly next weekend while Dublin, given a bye to the last four for the second year running, will travel to Longford’s Glennon Brothers Pearse Park on Saturday.

Offaly had already qualified but made it three wins from three by beating Wexford 2-12 to 1-7 with goals from Cian Johnson and Conor McNamee, piling more misery on new Model County manager Paul Galvin.

Dublin’s semi-final opponents Longford were rocked by a late Wicklow goal which secured a 2-9 to 0-14 win for the Garden County.

Chris O’Brien pounced in Aughrim after a Wicklow point attempt dropped short and netted to secure their first win under Davy Burke.

A late goal stole a dramatic win for Jack O’Connor’s Kildare who thwarted Carlow with a dramatic comeback.

The Lilies trailed by 0-7 to 0-4 at half-time and slipped six points behind with 15 minutes to go.

They reeled off 1-6 without reply, however, to secure their second group one win and only missed out on the semi-finals due to their loss to Longford.

It was a dramatic conclusion as Kildare firstly levelled at 0-10 apiece following points from Adam Tyrrell, Jimmy Hyland, David Hyland and John Treacy.

Then Chris Byrne blasted a 70th-minute goal that proved the winning score in a 1-10 to 0-10 comeback win.