GAA previews: Ballyhale and Borris-Ileigh can set up final meeting 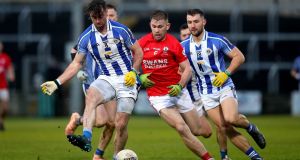 Corofin (Galway) v Nemo Rangers (Cork), Ennis, 1.30pm - Live TG4
The first big football clash of the decade and the potential to help define it. No club has won three All-Ireland football titles on the trot, and a win here would leave Corofin just one win away from making history. The Galway champions haven’t lost since February 2017, in the All-Ireland semi-final, to eventual champions Dr Crokes from Killarney.

Standing in their way are the ever-resurgent Nemo Rangers, still the most successful club in football history, who less than two years ago fell to Corofin in the 2018 final by a crushing 15 points. Their rise again in 2019 was particularly swift, manager Paul O’Donovan blending youth (including his two sons) and experience (especially Paul Kerrigan) to good effect, Luke Connolly also central to their high-scoring rate. Corofin’s class however still gives them the edge.
Verdict: Corofin

Ballyboden St Enda’s (Dublin) v Kilcoo (Down), Kingspan Breffni, 3.30pm - Live TG4
They huffed and puffed on that miserable Sunday in December and still Ballyboden never once blew Eire Óg away, as some people predicted, late points from Warren Egan, Michael Darragh Macauley and Ryan Basquel sparing another Leinster upset to go with Mullinalaghta in 2018.

It was a game however that will have brought on Ballyboden, proving their biggest test this year, when they needed it most, Shane Clayton admitting during the week the 2016 All-Ireland champions are intent on getting back to the top.

Only Kilcoo will feel their time has come too, after winning seven of the last eight Down titles, reaching the top of Ulster for the first time, after the third attempt, the backroom input of Mickey Moran and Conleth Gilligan being hailed as the difference. The Dublin champions still boast a little more guile.
Verdict: Ballyboden St Enda’s

Ballyhale Shamrocks (Kilkenny) v Slaughtneil (Derry), Páirc Esler, 2pm - Live TG4:
There is a difference here and not just the fact Ballyhale are coming in fresh from winning a 10th Leinster title. They have picked off this season where they left off the last – as All-Ireland hurling champions.

With TJ Reid, Adrian Mullen, and Colin Fennelly all in impressive form for Ballyhale, and Henry Shefflin looking increasingly composed and comfortable on the sideline, it’s an ominous task for Slaughtneil, in part because in the Derry club are still operating with several dual players.

Chief among them is Chrissy McKaigue, who admitted during the week that even after claiming three Ulster titles in the last four seasons, a seven-in-a-row within Derry, Ballyhale rank as one of the best teams of the last 15 years. A mountain too high surely for the Maghera hillside men.
Verdict: Ballyhale

St Thomas (Galway) v Borris-Ileigh (Tipperary), LIT Gaelic Grounds, 4pm - Live TG4
Two notable comebacks of sorts, Borris-Ileigh emerging from Tipperary with some style for the first time since 1986, and St Thomas back at the semi-final stage less than a year after the crushing defeat to Ballyhale in last year’s final.

That loss was in part marked by the cruciate injury suffered mid-game by Fintan Burke, his return in the Galway championship, along with Éanna Burke, adding further momentum, David Burke and Conor Cooney also in fine scoring form. Still Borris-Ileigh’s momentum looks the more capable, former Portumna manager Johnny Kelly showing his aptitude for the big challenge and this should add to that.
Verdict: Borris-Ileigh