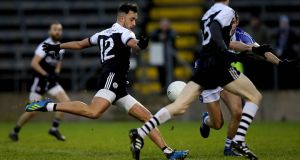 There may be little to do in Kilcoo other than going to Mass and having sheep, as Aaron Branagan told RTÉ back in November, but on January 19th you can bet there will be few sheep tended to and the early mass will have to do. The Kilcoo journey continues all the way to the biggest day in the club calendar, against perhaps the greatest side in the history of club football, in Croke Park no less.

“There’s a great buzz around Kilcoo at the moment and in the wider Down area in general,” explained Kilcoo selector Conleth Gilligan, soaking up thoughts of the village in Croke Park. “Down football has been a wee bit stagnant this last while; that will give everybody a lift going into the New Year.

“You’ve been watching [Corofin] for the last number of years and they’re just an incredible team. For a club team to go with that level of consistency, we know the challenge that’s there. From that perspective, we’re there.

“We’re going to savour this good feeling and we’ll be back down to Earth tomorrow with a bang knowing we’re playing one of the best club teams that probably ever played the game.”

Coming into the game the Dublin and Leinster champions may have felt burdened by an uneasy relationship with semi-finals. Back in 2016, en route to the All-Ireland title, Ballyboden had to dig deep, forcing extra-time with only 14 men against Clonmel Commercials. Moreover, this season’s Dublin championship saw the club in those same familiar surroundings, chasing St Jude’s for the most part before just getting their noses in front.

For Kilcoo, however, the track record hasn’t been as extensive. This was terra igcognita - and questions remained unanswered.

How would they react to playing this side of Christmas?

Would their first Ulster title, along with the mince pies and whatever else the festive period offered, provide sufficient sustenance? Would there be room for more?

Based on just the opening 20 minutes of evidence, Kilcoo had more than enough appetite, going tit-for-tat with the 2016 champions until finally we got proof: a Ryan Johnstone goal, drilled low and hard, after a dizzying spell of weaving build-up play through Ballyboden’s defence. But Anthony Rainbow’s side are nothing if not seasoned, rarely deterred and clinical when required.

Against a forward line boasting surnames like Basquel and Keaney, nothing short of unwavering patience and discipline is needed in abundance - and that’s exactly what Kilcoo brought. The South Dublin club were still able to take their chances though, Colm Basquel nailing two frees, Ryan Basquel too nailing a brace from placed balls with one from play and Conal Keaney showing all his wit to split the posts before heading in for the break.

The last two frees in particular, a Colm Basquel effort from the left and a Ryan Basquel score from the right, were evidence of what would continue to be required from the Down outfit after the interval. Ballyboden weren’t going to go away. They never would.

As the second half developed the respective styles became hugely contrasting, Ballyboden bringing a sense of composure, carefully picking their passes and remaining happy to progress up the field at their own pace. Kilcoo were noticeably pacier, breaking at speed and showing no signs of 30 minutes of graft.

“We would have talked about that [THREAT]going into the game,” admitted Ballyboden manager Anthony Rainbow afterwards. “Kilcoo’s game is built on turnovers.

“But you have to give Kilcoo credit where it’s due. They’re a very good side and they’re going to take a lot of beating when it comes to the All-Ireland final.”

A worsening situation for Ballyboden was made all the more ominous when Michael Darragh MacAuley received a black card, on top of the earlier one handed out to Aran Waters. They trundled on, just never reaching the levels of hunger exhibited by Kilcoo.

That, as it happened, made all the difference and they’ll relish the chance of causing another upset in two weeks’ time - once they decide who’ll tend to the sheep.