Having ended 33-year wait for a county title, every step is a bonus for former Tipp defender 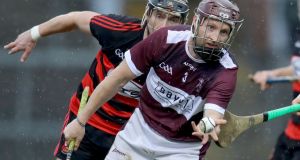 Borris Ileigh’s Paddy Stapleton in action against Ballygunner’s Pauric Mahony during the Munster club final at Páirc Uí Rinn. “You dream of winning a county title but the All-Ireland is more of a fantasy thing.” Photograph: Bryan Keane/Inpho

Winning the AIB All-Ireland club championship with Borris-Ileigh? Paddy Stapleton generally has a way with words but he struggles to explain how that might feel.

Stapleton, 35 now, thought these sorts of occasions were over for him. An All-Ireland winner with Tipperary in 2010, his last Croke Park appearance was a brief one as a blood substitute early in the 2015 semi-final defeat to Galway.

The following September, he didn’t make the 26 for the final win over Kilkenny and retired that November. Four years later, an Indian summer arrived in the form of a first county medal and, shortly after, a Munster club title.

“It would be hard to put that into words because, like, obviously you dream of winning a county title but the All-Ireland is more of a fantasy thing,” said the defender.

“You’re kind of lying awake thinking, ‘Jeez, wouldn’t that be unbelievable’, but we couldn’t really have said it was a serious thing for us for a long while but then Johnny Kelly...I think it goes back to the fact that Johnny always had confidence in us. I remember him saying to us before we ever won the county in the last couple of years, ‘Lads, yee don’t know what yee have here. Yee have such a dynamic team and if you ever get out of Tipp...’ and he’d have to pull himself back. I think he always had that belief in us.

“So the All-Ireland? It has always been a dream thing, I don’t know how it would feel. If it felt as good as the other two, the county and Munster, it would be unreal.”

The county final win, the club’s first since 1986, was the really special achievement for Stapleton. Having come up short in the 2017 decider, hammered by Thurles Sarsfields, he felt the pressure weighing down.

“I can only compare it to the Munster final and certainly the pressure for me was way higher in the county final, definitely, oh Jesus it was,” he said.

“I’m getting on and that’s the one thing you really wanted to do after all these years, win a county final, because you just want your career to mean that much, that I sacrificed everything – and I loved doing it – but I did win the ultimate and what I wanted to win at the end of it all. So it was pressure, yeah.”

He doesn’t say it but at the end of a dark 18 months or so, for himself and the whole community, the desire to conjure up something to actually celebrate, and to lift the gloom if only briefly, must have been strong.

Last May, Stapleton’s sister, Amanda, passed away after a cancer battle. The same month, John Ryan, a young player in the club, passed too and his teammate Nicky Cooney followed in August. Club icon Brendan Maher also lost his cousin, Lorraine, and a club stalwart, Martin Hayes, tragically died.

Asked if it was in any way easier to approach a first Christmas without Amanda, given the hurling success, Stapleton simply shakes his head.

“No, I wouldn’t say it’s more [bearable], it’s great that you have a focus, I’ll say that much,” he said. “But no. Look, we’re a family together and we’ll get through it.”

A helpful distraction then is all hurling can be, even when challenging for an All-Ireland.

“Winning the county, the supporters were so happy after that,” said Stapleton. “The outburst was unbelievably memorable. As players we didn’t discuss it. There wasn’t a need. We had our own thing to do. But Jesus, you felt it after the match. It was certainly different from any win I’ve ever had.

“Even after the county semi, it was something similar, at least we had something to be positive about. Because there was a massive dark cloud of different stuff that happened. This is like its own cloud now, pushing all that to the side. It’s a good run after a bad run of events. This is just something to have people looking forward.”