McKenna Cup: Tyrone open their campaign with win over Cavan 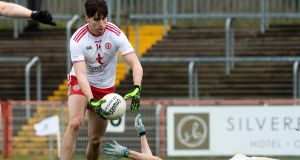 Holders Tyrone remain on track to return to the knock-out stages of the Dr McKenna Cup after setting up a midweek showdown with old rivals Armagh.

Mickey Harte’s side opened their campaign with a 1-16 to 0-13 win over Cavan in Omagh to move joint top of their section with Armagh.

The neighbouring counties will face off at Armagh’s Athletic Grounds on Wednesday evening and the winners will advance to a semi-final on Sunday.

Conall McCann’s goal was crucial for Tyrone who handed a debut to promising midfielder Conn Kilpatrick and went in 0-8 to 0-6 ahead at half-time.

Kilpatrick hit two early points for the Red Hands while McCann’s goal arrived in the third quarter during a 1-4 scoring blitz from the hosts. Rookie Dan Kerr also contributed a brace of points for Tyrone while Niall Murray struck 0-4 for an experimental Cavan.

The winners of Tyrone’s section will play the section B winners which will be Antrim or Down.

Those two counties also meet on Wednesday and Antrim will be buoyed by their 2-8 to 0-13 win over Fermanagh.

Paddy McBride scored both of Antrim’s goals and his second, a cracking effort from over 20 metres out, came late on in Ahoghill, snatching victory from a Fermanagh side that had led throughout.

Donegal began their campaign with a 1-12 to 0-14 win over Monaghan, a result that means a win or a draw away to Derry on Wednesday will secure their semi-final place.

Donegal dug deep to mine out the win having slipped five points behind after a slow start and been reduced to 14 men following the dismissal of Brendan McCole early in the second-half.

Monaghan led 0-9 to 0-7 at half-time with Jack McCarron leading the scoring for them but they couldn’t push on despite their extra numbers.

Donegal levelled it up at 0-10 apiece before Peadar Morgan netted and they held off a late Monaghan rally that included a missed penalty from Farney attacker Shane Carey. A fourth county will qualify for the semi-finals as best runner up from the three sections.

1 Winds of change as Ireland name a refreshed team, picked on form
2 Who is Caelan Doris? Meet Ireland’s newest rugby star
3 Gordon D’Arcy: If Farrell can tap into our self-worth, we’re all on a winner
4 Clongowes calmly restore order after Terenure’s terrific start
5 Sigerson Cup final: Pat Critchley looks to defy the odds against DCU
Real news has value SUBSCRIBE