Champions Ballyhale Shamrocks made to work for victory by brave Slaughtneil 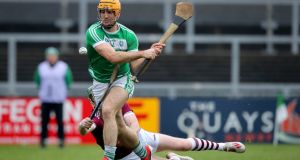 Reigning All-Ireland club hurling champions Ballyhale Shamrocks bared their teeth in Páirc Esler with a gritty five-point win over Slaughtneil, a display of the utmost resilience enough for them to defeat the Ulster champions in a thrilling display.

In an unfamiliar setting, Henry Shefflin’s side responded to everything the underdogs threw at them. A perfect start, deadly placed ball accuracy, resolute discipline in defence and even a late goal wasn’t enough to derail them, but they left Newry certainly feeling rattled.

TJ Reid exhaled deepest to top score with 11 points, 10 from placed balls, a totem pole of calming accuracy on the game that snowballed in their favour. Another Kilkenny All Star Colin Fennelly provided their two goals to power the Kilkenny aside across the line.

When Ballyhale midfielder Ronan Corcoran found the range in the 11th minute, it was his side’s first score from play. They knuckled down and adapted to the sweeper and played around Bradley, with Brian and Eoin Cody adding points either side of a TJ Reid free to illustrate their hurling flexibility.

Just after Brendan Rogers gave Slaughtneil the lead with a scorching point on the run under the main stand, Colin Fennelly linked up with TJ Reid to undo the Derry side’s good endeavour with a brilliant finish forged by Reid’s delayed assist.

Cormac O’Doherty ended the half with his rousing fifth free from significant distance to give Michael McShane’s side some added belief, a one-point game 1-11 to 1-10. Seán Ó Caiside added some more when he levelled the game minutes into the second half.

TJ Reid again settled his troops down with his low trajectory free’s but Evan Shefflin’s first point opened up a two-point gap. Then Colin Fennelly rattled the post and O’Doherty’s brace of frees had Slaughtneil in touch again.

Ballyhale took the emotion out of the proceedings with four unanswered scores. However, Rogers provided more inspiration for the Derrymen with a solo goal from a puck out to make it the minimum between the sides.

With a further sense of what was at stake, wingback Shefflin’s response was to land his third point and Colin Fennelly showed no mercy at the death with a goal borne out of sheer determination and bloody mindedness. The stuff of champions.