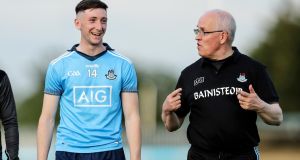 “It’s very hard to answer that in a soundbite,” says Tom Gray, before providing a calmly heated response to all the prophecies of doom in the face of Dublin’s football success, beginning with his own under-20 team.

The question was in fact twofold: is there any end to the conveyor belt of Dublin’s underage talent, and with so much funding being pumped into the county, what hope is there for everyone else?

“I’d have very strong views about it,” continues Gray, in his second year as Dublin under-20 manager, having managed the Dublin minors the year before.

“First off, in terms of this Dublin team, they lost an All-Ireland [minor] semi-final two years ago to Derry, and were hosed by Kildare last year in a Leinster [under-20] final. A different group, but a lot of the same players. I don’t see the Dublin train running through this level. If we were winning year after year I might have a different view.

“Regards the funding thing, it’s a source of massive annoyance and frustration to someone like me, who’s been a lifelong volunteer in the GAA. I don’t think it’s been well researched. I could demonstrate lots of information that would make it a lot more nuanced topic than it’s been, both in print and social media, and on TV.

“There’s lots of excellent coaching going on in different counties, I don’t think Dublin has an advantage in that respect. The narrative has been influenced by the best team to ever play the game, the senior team now. If they won two in the last six this probably wouldn’t even be a topic. But the fact they’ve won five out of the last six, as a consequence, it caused all sorts of why? But sometimes it’s a confluence of a number of factors which leads to it.”

Speaking ahead of Saturday’s EirGrid Under-20 All-Ireland final against Cork, set for Portlaoise, Gray also makes reference to the social value report carried out by his own club, Na Fianna, back in May, and also the voluntary work being carried out by rival northside club Ballymun Kickhams.

“It [funding] is one of a multitude of factors. In my own club [Na Fianna], we produced a social value report which Michael Clifford wrote about in May. That objective research suggested in Na Fianna there was over 2,000 volunteer hours a week and 40 hours from our Games Promotion Officer (GPO).

“If you want to talk about relative importance of volunteer hours, versus GPO hours, that’s objective research. And when you see the participation rates, the increase in hurling and ladies football at underage level, there’s been modest increases in participation in football. It’s a much more nuanced topic than this amount has been invested.

“Ballymun Kickhams are arch rivals of Na Fianna and have five or six on the Dublin team but that’s down to the work of the people on the ground, the work Paddy Christie does providing the social service to the area over the last 10 years. I’m sure Paddy Christie gets hugely frustrated when he hears the stuff in the media, when he’s provided a service to society. It’s a nuanced topic and it’s not as simple as the soundbites you hear in sports media.”

That’s doesn’t mean Gray’s Dublin under-20 team doesn’t boast some considerable talent, not least Ciarán Archer from the St Maurs GAA club in Rush, north county Dublin, who has scored 9-30 in the four games that have taken them to Saturday’s final, including 2-6 in last weekend’s semi-final win over Galway. That’s just one soundbite.

Still rival manager Keith Ricken, his Cork under-20 team having come from behind to beat Tyrone last weekend and also defeating Kerry in the Munster final, largely agrees with Gray’s argument, that the success of Dublin is certainly not all doom for everyone else.

“I couldn’t but be proud of the way Dublin go about their business. I mean it’s fantastic, a huge city, it’s our biggest city and it has taken off. I remember sometimes in the 90s that wasn’t the case. So it has now taken off. Dublin are putting money into it too, clubs are paying a significant amount of money, to bring a development officer in to do coaching and that. You take your hat off to that.

“Any success that Dublin have had, they’ve earned it. They haven’t take it at the expense of everyone else, they’ve earned it, they’ve upped the standards. You can throw money at stuff. We’ve tried that in lots of different organisations, the health system, everything, we throw money at it. That’s not solving it. What solves things is passion and belief and structure and work rate and ethics and I think we need to solve that first.”

What both managers also agree on is the need to raise the minor grade of football back to under-18, Gray making that point on the back of Dublin’s defeat to Mayo last weekend.

“That should be under-18, it’s just way too young. Last Saturday, the Dublin minors were playing Mayo before our game. It was an absolutely fantastic game of football, a joy to behold, but ultimately Dublin lost by two points, young fellas were devastated. And they are under a lot of pressure, social media stuff going about under-17 teams which I don’t think is a good thing, to be honest.”

Ricken agreed: “I was at the match last week and to see the differences in the players that went out on the field as 17-year-olds, some are just young boys really. I’d love to see minor at 19. I’d love to see it developmental at 17 backwards and no young fella at 17 years of age would be playing anything only 17 down.