Meyler will not seek a third season in charge on Leeside 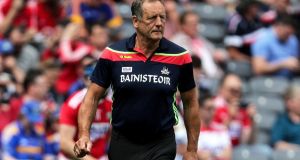 John Meyler will not seek a third year in charge of the Cork hurlers. Photograph: Laszlo Geczo/Inpho

Cork hurling manager John Meyler will not be seeking a third season in charge of the senior team, leaving the county board to begin the search for his replacement.

The Cork GAA executive confirmed on Wednesday afternoon that following the completion of his two-year term, Meyler has decided to step aside.

Meyler came on board for the 2018 season, having served as a selector with previous manager Kieran Kingston’s management team, which secured Munster honours in the same year, and his own term began with the retention of the Munster title in 2018.

However 2019 fell below expectations, Cork failing to reach the Munster final, and exiting the championship to Kilkenny at the quarter-final stage.

Meyler also served as under-21 manager, while also serving as a senior selector. He included a two-year term with the Cork under-15/under-16 hurlers in 2015 and 2016 with the group that went on to win an All-Ireland Under-17 title in 2017.

County chairperson Tracey Kennedy said: “John has been an outstanding servant to Cork GAA in a variety of roles over many years, and I would like to thank him both personally and on behalf of Cork for all that he has done and, I am sure, will continue to do.

We wish John, his selectors and backroom team all the best in their future endeavours and thank all involved for an immeasurable voluntary contribution over their two-year term.”

Speaking earlier in the day at Bord Gáis Energy All-Ireland Under-20 hurling event, former Cork All-Ireland goalkeeper Ger Cunningham, who also served as a Cork selector and later Dublin manager, suggested there was disappointment in the county after the way the season unfolded.

“I’d say disappointment really, disappointment and frustration from the point of view of probably good expectation, got to a semi-final last year and probably unlucky not to get to the final, and the team that beats you goes on and wins the final,” said Cunningham.

“The expectation was there in Cork going up to that quarter-final that they would beat Kilkenny. So disappointment from the point of view that at the end of two years that that’s where we’re at, we haven’t pushed on to compete or even get into a final.

“I’d say obviously the hope is that the under-20s are coming through, that this batch of lads are talented players, they’ve been kind of earmarked over the last number of years that players from that team have the potential to step up. Came close last year, won Munster but didn’t win the All-Ireland, maybe it might be the reverse this year; didn’t win Munster but still have a chance of winning the All-Ireland.

“Now that we’re back competing at that level – for years we hadn’t been competing at minor or under-20s or under-21s – now at least we’re competing and getting to the last two or four. That’s a good starting point. The hope then would be that there’s a batch of players coming through that are potentially good enough to step up and that hopefully it’ll be sooner rather than later and that while we have good players.”

Asked if another county job might interest him, Cunningham responded: “There’s a lot involved. Intercounty management is a big commitment from all points of view. It would have to be something to be considered if it was there, at the time it was offered.”