All still to play for at two grades for Cork football 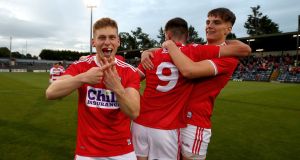 They’ve still two and possibly three games to play and the chance to leave their indelible mark on the summer, and with that raise the hopes and spirits of Cork football. Only for better or for worse none of those games involve the senior team.

Sunday’s final round of the All-Ireland Super 8s does have Cork facing off against Roscommon at Páirc Uí Rinn, only with nothing left to play for there (both teams have zero points) the result may as well be written in invisible ink. It will have no bearing whatsoever on the final outcome of the Super-8s.

Although they haven’t won an under-20 All-Ireland (previously under-21) since 2009, Cork still boast more titles than any other county with 11; Dublin last won in 2017 and have only ever won five. Cork haven’t won an All-Ireland minor football title since 2000, but remain the third most successful county in that grade after Kerry and Dublin,

For Keith Ricken, the current Cork under-20 manager who also works as a Sports Administrator at the Cork Institute of Technology (CIT), success at both these underage grades won’t automatically transfer to the senior team, but will help: more importantly he senses a growing positivity about the future of Cork football.

“I’m involved in third level, on the ground as they say, with students, and I didn’t get that sense of negativity as people maybe did from the outside looking in,” he says. “And I see the standard of football, the standard of footballers, the clubs, the structures that are there, the work that’s going on in development squads, all that kind of stuff.

Despite not winning a game in the Super 8s, Ricken is no less optimistic about the future of the Cork senior team: “I know a lot of lads that are playing with Cork seniors, it’s like riding a bike, I mean you can’t unlearn how to ride a bike. You mightn’t become good at it for a while but you’ll eventually get back on it and I think it goes in cycles, when you’re around long enough you see that it does go in cycles. And it’s performance based, as opposed to crisis based.

“Cork is a huge county, there’s more young lads in summer camps in Cork than there is in the whole of Connacht. That's how big Cork is. You also need to put your structures in place. Cork are doing that, they had their [COMMITTEE]with Brian Cuthbert and Graham Canty and Conor Counihan, the Cork county board have put a five-year plan in place. They’re putting their structures in place. Conor Counihan has taken over the development now.”