Mayo and Kerry headline a GAA weekend to savour 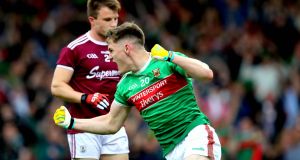 It was, of course, ever so good of the Wimbledon organisers to gerrymander Federer and Nadal onto the same side of the draw this year, just so they could meet yesterday and not be distracting the rest of us over the weekend. There are decks to be cleared and a stage to be shone. It’s go time in the GAA championships and there is much to discuss.

With six games on television over the weekend between hurling and football, we’re a little spoilt for choice. But in truth, one game stands alone. You could clean the slate of the other five matches and just leave Kerry v Mayo in Killarney tomorrow on its own and only the most churlish of cribbers would kick up about it.

In a world where Dublin appear to be motoring serenely on towards the five-in-a-row, it’s always hard to gin up much broadly-held enthusiasm for the football summer. But as anyone who has been watching will tell you, it’s been a terrific championship so far. Ulster and Connacht hummed throughout, the Munster final was exciting for once and the qualifiers had the usual handful of nail-biters.

And now the Super-8s have Mayo heading to Killarney. If the young bucks in Peter Keane’s Kerry set-up weren’t fully aware of their history, they’ve surely been told enough during the week that no Kerry team has lost in Fitzgerald Stadium in 24 years. Mayo have beaten them – and beaten them up – twice already this year, and blitzed them in the All-Ireland semi-final replay two years ago. This is either graduation day or it isn’t.

Mayo have the edge in experience but they’re not without youth either. James Carr has a couple of years on the likes of David Clifford and Seán O’Shea, but only a couple. And they haven’t had to spend the week as the most famous Irish sportsperson in the world.

By Tuesday night, the clip of Carr’s goal against Galway last Saturday had been watched close to 8 million times. Do the maths and it meant that in the three days since Carr pinged the ball into Bernard Power’s top corner, it was being watched at a rate of almost 2,000 views a minute. That’s a mad week in any person’s life. If he has a next trick, Killarney is the place to produce it.

Up in the air

The other three football games are condemned to live in the shadow of the big one but they have their charms all the same. Tyrone have to go to the Hyde to play Roscommon, a side who have already beaten Mayo and Galway away this summer. A home win would fairly shake the thing up for all concerned. We presume Meath and Cork will come away from Donegal and Croke Park empty-handed, but two out of four games being up in the air isn’t bad.

And then there’s the hurling. Cork and Kilkenny, Tipperary and Laois, a quarter-final double-header in Croke Park tomorrow. For the three blue-blood counties, it’s a chance to redeem a season gone wrong, and none of them will go into it entertaining the thought that things can’t be saved. For Laois, it’s presumably the end of the road, but no less special for that.

By tomorrow night, only the winners plus Limerick and Wexford will still be standing. In football, all eight will be breathing but half will be winded.

There are only seven weekends left altogether. This is one to savour.