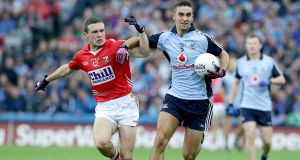 Dublin’s James McCarthy with John O’Rourke of Cork during their championship quarter-final in August 2013. It ended in a 1-16 to 0-14 win for Dublin. Photograph: Morgan Treacy/Inpho

Hindsight is a stubborn taxi driver. Hard though you try to protest, it takes you in a certain direction regardless of whether it’s the right way to go. Looking back now it’s easy to say that the last meeting of Dublin and Cork in the championship six years ago was always going to be a fork in the road for both teams. Yet don’t for a second believe anyone who says they saw this level of divergence coming. Let’s stop talking falsely now.

Odd though it seems at this remove, Dublin had a serious blind spot with Saturday night’s opponents before 2013. For much of the previous decade Cork had never seen a whole pile to be scared of in the Dubs, and only in a generous mood would they have regarded them as equals. By the time they met in the All-Ireland quarter-final that August they were unequivocally something that had to be checked off the list for Jim Gavin’s nascent side.

The numbers told a tale. Between league and championship, the counties had met 12 times since the turn of the century and Cork had won eight, drawn one and lost only three. In more recent history they’d beaten Pat Gilroy’s Dubs in an All-Ireland semi-final and a league final, stake-to-the-heart defeats both in their own particular ways. A sound league trimming at the start of February that year – Dublin winning 1-18 to 2-9 – suggested a turnaround was on the cards but nobody could claim it as a certainty.

Indeed, a rummage through the respective squad profiles at the time shows up plenty of similarities and even, on the face of it, the basis for a rivalry through the middle of the decade. Both had won All-Irelands in the previous three seasons, after all.

More to the point both still had a fair chunk of those players still involved. For Stephen Cluxton, Rory O’Carroll, James McCarthy, Diarmuid Connolly, Bernard Brogan et all on the Dublin side, read Alan Quirke, Graham Canty, Alan O’Connor, Aidan Walsh, Daniel Goulding and the rest in the Cork ranks.

In addition, they both had a heavy yield from successful Under-21 teams coming through. Dublin’s golden crop that won the 2012 All-Ireland at that grade included Ciarán Kilkenny, Jack McCaffrey, Paul Mannion and Kevin O’Brien, all of whom started against Cork in the senior game the following August. In time Gavin would bring along Brian Fenton, David Byrne, Niall Scully, John Small and Cormac Costello at various stages too, all from that 2012 side. Some bounty.

But Cork had their own conveyor belt to pluck from too. In 2012 they had lost the All-Ireland semi-final to that Dublin team with a side that contained Damien Cahalane, John O’Rourke, Tom Clancy and Brian Hurley, all of whom would line up for the 2013 senior game.

That team had Luke Connolly, Ruairí Deane in it as well, and when they made the final against Galway in 2013 they had the likes of Ian Maguire and Brian O’Driscoll in the mix. Whatever else people said about Cork in 2013, nobody accused them of being short of potential.

Here’s where the streams begin to uncross themselves, however. Whereas Gavin’s Dublin were zipping off on the beginning of their journey together, Conor Counihan’s Cork were stuttering to the end of theirs. Counihan was in his sixth and final year – he resigned on RTÉ after the game – and although the obit writers were suitably respectful most laced their copy with the sense that Cork’s first All-Ireland in 20 years represented an under-achievement.

Although the side he played that night wasn’t particularly old, some of the more fundamental elements of it were getting along. Quirke was 36, Canty was 33, so was Pearse O’Neill. So were Donncha O’Connor and Paudie Kissane, both of whom came off the bench. All but O’Connor retired in the months that followed.

Some of those not claimed by age were also thieved by circumstance. Three of the side that started that night in 2013 will play for Cork in Croke Park this weekend but they will be wearing helmets. Eoin Cadogan, Damien Cahalane and Aidan Walsh all hung around for a spell and tried to do one or other or both. All of them ended up as hurlers by the end.

Ciarán Sheehan left for Australia that November, and may or may not return to the fold next year. Hurley would miss three of the next six seasons, give or take, through injury. Colm O’Neill was even more cursed than that and had to retire at 29. Goulding was still only 30 when he pulled stumps in 2016, Michael Shields was 31 when he went the following year. All in all, 13 marquee names have leaked out of the Cork set-up since that night in 2013.

Contrast it with Dublin, where 14 of the 20 players used that night are still involved. Of the six who aren’t, Diarmuid Connolly won four more All-Ireland medals before finishing up, if we presume that’s what he has done.

Bryan Cullen retired and became maybe the most important figure in Dublin football after Gavin and John Costello.

Ger Brennan, Denis Bastick and Paul Flynn eventually submitted to the calendar as well, the latter only a couple of months ago. O’Brien never really made it back from doing his cruciate in 2014.

Okay, so if you had known all that was coming in August 2013, then maybe you’d have predicted what followed. But you didn’t. The game itself ended in a 1-16 to 0-14 win for Dublin but it didn’t hint at anything like that.

It’s true that Dublin were the better side and would have won more comfortably had they not missed a hatful of goal chances. But it’s also true that Cluxton was their top scorer on the night with 0-6 against his name and that they needed 19-year-old McCaffrey to be the one who eventually did the needful in front of goal.

As for Cork, all you knew for sure was that they were going to have to find a bulwark for the middle of their defence as it became clear that there was no juice left in Canty’s dogged posting there. That said, it’s worth remembering that Dublin were still only a year from deciding that they needed a thorough reimagining of what they were doing in that spot as well.

Cork replaced Counihan with Brian Cuthbert and pushed Mayo to a single point in the 2014 quarter-final, while Dublin’s championship ended a game later but far more emphatically at the hands of Donegal. Neither Cork’s skyfall nor Dublin’s rocket to the moon looked inevitable at the end of that summer.

They met in the following year’s league final – after Cork had won the league opener in Páirc Uí Rinn. But by then Dublin had kicked away off the front of the peloton and were starting to put miles of road between them and everybody else. That league final was number six in what would become that monumental 36-game unbeaten run stretching out over two years. Six of the starting team that beat Meath three weeks ago have never lost a championship game.

Annual hammerings at Kerry’s hands in Munster, interrupted only by the 2016 defeat to Tipperary. Minimal impression on the qualifiers. Division Three football in 2020. Relentless turnover of players. Six of the starting team named to play Dublin have never played in Croke Park.

Yet here they are, taking their baby steps along the road back. It’s too much to imagine the streams are converging again, but it’s possible at least that they have stopped getting further apart. Saturday night doesn’t promise much for Cork but if they can come away with that at least it will be something.