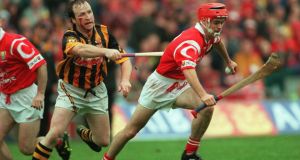 It’s the most revisited All-Ireland hurling rivalry of all. On Sunday afternoon at Croke Park Cork and Kilkenny will square up for the 29th time in the championship, including the re-fixture of the disputed 1905 final. Kilkenny lead the head-to-head, 15-10 with two draws.

On Sunday they come at it from the specifically modern perspective of an All-Ireland quarter-final, indicative of reduced circumstances 13 years after their last final and having played two semi-finals in the meantime, but the resonance is still there.

It’s a genuinely storied pairing: the narrow wins – “the usual point,” was Jack Lynch’s doleful summary of the 1939 final – a tendency not to accommodate favourites and shot through with historical undercurrents.

It is more than just a match. The tradition stirs people

Hurling, amplified by the newly published Irish Press, became a mass-spectator sport on the back of the twice replayed 1931 final.

That narrow victory of 1939 came on a day of – surely even 80 years later – unequalled portentous drama in rain so heavy that Kilkenny corner forward Jimmy Phelan told this newspaper “the dye from our jerseys ran into our togs,” as the Thunder and Lightning final played out its forbidding accompaniment to the news that Britain had declared war on Germany that morning.

History and traditions are great for dressing up fixtures but to what extent do they provide actual context as opposed to trivia?

“There’d always be respect playing Cork. The counties would never take each other for granted, no matter how bad one of them would be going. There’s an acceptance that it’s basically going to be about skilful hurling – not saying that other counties aren’t skilful!”

Noel Skehan expresses a time-honoured view. If anyone’s done enough time to be entitled to that view, it is the former Kilkenny goalkeeper. Nine times an All-Ireland medallist, three times as a replacement, captain in 1972 and selector with Brian Cody for the All-Ireland wins of 2002 and 2003.

Seven of his All-Ireland final experiences were against Cork, five successful.

Seán McGrath’s catalogue couldn’t be as extensive but is nonetheless significant with two finals as a player, evenly balanced, and six years ago victory in the only previous quarter-final meeting between the counties as one of Jimmy Barry-Murphy’s selectors.

“I think it takes a life of its own,” he says. “It is more than just a match. This weekend is the first knock-out match for both teams and players and management – particularly management – know that history points in a certain way to rivalry and titanic battles and maybe players who haven’t had a spectacular season to date catching fire. The tradition stirs people.”

Within the time-frame of 125 years since the counties met for the first time in the delayed 1893 All-Ireland final there are however an abundance of personal stories, woven into the fabric of history of Cork-Kilkenny.

Skehan and McGrath are no different in contributing their own threads to the great tapestry.

As deputy to Ollie Walsh, Skehan spent a decade on the Kilkenny bench, watching All-Ireland victories in 1963, 1967 and 1969. His first start was memorable, as captain in the 1972 final.

As part of a curious extended trial, between 1970 and 1974, All-Ireland finals – as well as semi-finals and provincial finals – were played over 80 minutes, which was a big step up on an hour, Skehan remembers.

“It was tough going – another third of a game and a long time to keep up your concentration. Lads now would be fairly tired after 70 minutes and I can tell you after 80, lads out the field would be exhausted.”

It was an extraordinary match. Going into it, Cork as league winners with a free-scoring Munster championship behind them were favourites and that’s how it played out. Nearly an hour gone and Cork led by 5-11 to 1-15.

“I’ll always remember a point, scored by Con Roche from 90 yards out under the old Cusack Stand to put them eight clear. I remember thinking, ‘God almighty, if they’re hitting them from there I’ve no chance of going up for that cup.’

“But from then, Kilkenny took over and we were on top at the right time. It was a brilliant comeback and I remember Eddie Keher’s goal that started it but funnily enough, what I remember best was Con Roche’s point.”

Cork didn’t score at all in the last 20 minutes. It had been an astonishing turnaround. Jack Lynch, now taoiseach, made another contribution to the lore of the fixture. Having left Croke Park early to catch a flight to Munich to visit the Olympics, he was flabbergasted to learn later that Kilkenny had won, not by the ‘usual point’ but by seven – a 15-point turnaround in the last quarter.

In these pages Paddy Downey handed out plaudits after the famous victory.

“Skehan’s magnificent goalkeeping deprived the losers of at least four more goals in this half and the small man from Bennettsbridge, playing in his first All-Ireland after 10 years as substitute to Ollie Walsh, shares with Henderson the honourable rating of ‘men of the match’ – in my opinion.”

The outcome also highlighted other aspects of Cork-Kilkenny matches: how perilous the status of favourites was and also how flamboyant Munster champions frequently came unstuck against supposedly more prosaic teams from Leinster – an undercurrent heading into this weekend.

Seán McGrath was having a whale of a time in 1999. Even then an increasingly anomalous presence in a Cork attack that was not very physical, he was slight and 5’8” with a penchant for ball-playing and had provided touches like the one-handed, flick assist for the Joe Deane goal that helped to beat Clare in the Munster final.

He would end the year an All-Star, having shot three points in the All-Ireland on a day when weather contributed to making it what is still the lowest-scoring final in 65 years.

“The rain is one thing,” he says of his memories of the day. “It wasn’t a scalding summer like last year but it had been decent enough and most days we played were quite mild and warm. There’s a weird thing I always mention when someone asks me and that’s how cold it was. Going into a game, particularly an All-Ireland, you wouldn’t think stuff like that would occur to you – that it would be more about the game itself – but I remember being hit by how chilly it was.

“We started reasonably well and at half-time it was reasonably close but they did get ahead by four, which in hurling terms is a very tight margin but on the day it was daunting enough because it was a very low-scoring game. Conditions had deteriorated and it had become very slippy.

Positions have changed completely these days, physically and tactically, but I think the fundamentals are still there

“We trusted what he had told us – to stay patient and chances would come – and we trusted our fitness because we had a great fella, Teddy Owens, looking after that. We wore them down and made a couple of great substitutions at the right time and a couple of switches. Not by stretch of the imagination, a good game but we ground it out.”

His own role was significant, a three-point salvo in a 0-13 to 0-12 victory, including an extraordinary shot from out in the corner between the Cusack Stand and the Hill. When that dropped over, it equalised the match at 0-11 each. For the player the match had been passing him by a little bit and he was becoming anxious.

“Sometimes fellas embellish things and make up stories, ‘ah, I kept calm and focused’,” he says. “The reality was that of course I was getting frustrated. I say this still to forwards and the positions have changed completely these days, physically and tactically, but I think the fundamentals are still there.

“You need to be scoring. You can still do the tracking and the working and blocking and setting up scores but at the end of the day we all have a habit – I do anyway – of going straight to the scorers before reading the match report. That’s my instinct and it certainly was at the time.

“Of course I was frustrated but I had faith and trusted Jimmy that he’d stay with me. I remember getting the first score and feeling nearly elated with relief. Yes! I’d missed a few handier ones. That first point changed my whole demeanour and I felt the confidence.

“Any forward will tell you that some days you feel you can score from the carpark and other days they won’t go over from the 21. It’s weird when you get your confidence up. My third one was as much that as anything. Thankfully it went over because he wouldn’t have been too happy on the line if it went wide!”

In fact the score that equalised was identified afterwards by manager Jimmy Barry-Murphy as the moment he knew that his team would win.

Sunday is different, more industrial and less climactic, a contest that will leave the winners with two more matches if they are to emulate Limerick and win the All-Ireland from the quarter-finals. Noel Skehan though identifies the essence of it.

“No. I know it’s a quarter-final but it’s knock-out. No second chances.”