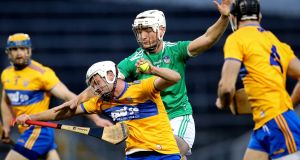 Clare’s Jack Browne under pressure from Kyle Hayes of Limerick during the Munster SH quarter-final at Thurles. Photograph: Ryan Byrne/Inpho

The GAA’s journey of faith began in the old shrine of Thurles with a scorching display of hurling from Limerick spreading a little warmth through this bleak season.

John Kiely’s young team struck 0-36 in a unique Munster quarter-final which was also doubling as the delayed league final. Clare, led by Tony Kelly, had to travel through their vapour trails.

Limerick, then, are league winners for the ninth time in history and back to back winners for the first time since 1984 and 1985. Over the course of this wintry afternoon they also shortened the odds on their landing another McCarthy Cup.

“Listen, I’ll be honest with you, the buzz was there this morning,” said John Kiely a few minutes after Declan Hannon had lifted the cup and declined to give a speech to his friends and team-mates.

“The buzz was there all week. We could all feel it, probably today more so than ever because we realised how privileged we are to have an opportunity to play and yeah, everything was as normal apart from the fact that there’s nobody here, everything else was as normal in terms of the nerves, the excitement, the unknown, the anticipation of what might be – the unknown that you might not have thought of that might just happen.

“And I think the players will still be much more satisfied as individuals on both cases, I would imagine, that at least they got to play their game today. And I’m sure an awful lot of people at home got a lot of enjoyment out of being able to sit down of a Sunday afternoon and watch a championship match, especially the older people in the population.”

Kiely naturally preferred to reflect on the even first half – the teams retired to their respective areas at 0-15 apiece – cautioning on the lack of intensity and a few loose possessions, which was true. But Limerick were dominant here.

It took a supernova display from Clare’s Tony Kelly to force this league/championship afternoon into the realm of contest. It would be reductive to say it was Kelly versus Limerick but his 0-8 from play, in a tally of 0-17, was achieved with incredible economy and accuracy.

He was the only Clare forward who seemed to find oxygen in the depths of Limerick’s huge, athletic back division. A second-half goal by Ryan Taylor briefly interrupted Limerick’s lightning start to the second half.

But ultimately there was nothing that Kelly or anyone could do to prevent the game from lapsing into a procession of eye-catching scores from Gearóid Hegarty and Kyle Hayes and, well, all of the Limerick forwards.

“Disappointed immediately after half-time with the five points they got,” said Brian Lohan, Clare’s manager.

“Straight away, that put us on the back foot, made defending their goal that bit easier for them in the second half. We depend on Tony Kelly a lot and he produces it. He’s a once-in-a-generation kind of player. I wouldn’t fault any of the players in their effort or spirit. We just came up against a really good team. They have quality. Good players all over the field and physically they are very strong. And they have good spirit about them as well.”

As a scouting report, it is useful for all potential candidates out there. As a crowded championship winter beckons, the games will come thick and fast – and silently.

It’s just after six o’clock on Sunday writing this now and the old pitch in Thurles is lit up and looks splendid. And there’s not a sinner to be seen nor a single shout of mischief from down the town. That’s what being league champions sounds like in 2020.