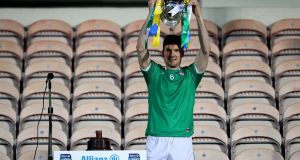 Gulp. The scoreboard doesn’t lie. In winter or in summer, Limerick’s young guns are capable of extraordinary scoring feats and on the most unique league final the GAA has ever staged, they put on a show to remember. And, a fixture doubling as a championship opener, they set up a Munster semi-final clash with Tipperary at Páirc Uí Chaoimh.

Clare were combative here but it took a bravura hour of hurling from Tony Kelly to maintain the illusion of a contest. The Ballyea man was tightly marked but still fired 0-8 from play and 0-17 overall to take the fight to Limerick in what was a supreme personal performance. But his luminosity inadvertently exposed Clare’s struggles to make an attacking impression in general.

They were physically bossed by Limerick here and simply couldn’t live with Limerick’s relentless scoring power.

It took Limerick until the last 15 minutes to pull out of sight. But it is possible for John Kiely to chart an alternative first half in his mind, one in which his defence did not permit Clare to gain a foothold in the game with the concession of four needless fouls , which Kelly easily converted. It wasn’t so much the scores that hurt as the sense that it contributed to the Ballyea’s man quick ascent into that molten, score-from-anywhere state of playing.

That there was nobody present in Thurles to witness his first half in the flesh was one of the many stranger things about the day.

In contrast, five of Limerick’s quick starting forwards scored from play and Graeme Mulcahy, the lone exception, attracted a swarm of Clare defenders with every possession. Tom Morrissey seemed to have set himself the target of scoring points that fell somewhere between gorgeous and outrageous. The score of the afternoon came from a loping run from Gearóid Hegarty along the length of the deserted Ó Riáin stand before he found Peter Casey with a brilliant flick inside.

So the reigning league champions were purring. But they couldn’t put Kelly’s fire out at the other end of the field. Nominally, he was playing corner forward but Brian Lohan clearly gave him the run of the park. Limerick had forced a bit of discipline on the score board just before half time, opening up a 0-15 to 0-12 lead. Kelly responded by stepping into the web of intricate hand-passing which Limerick prefer in working the ball out of defence, to whip another score.

A minute later, he won possession and a free in a crowded midfield and converted that. Pat O’Connor won a heartening high ball in the last minute and delivered a clearance which resulted in Diarmuid Ryan’s point to leave the teams level at 0-15 apiece at the half.

For all that, there were signs that Clare were quaking a bit. They picked up three first half yellow cards. One of those, David Fitzgerald was substituted at the half. And the reliance on Kelly for scores was glaring. The big questions would arise if Kiely and Limerick came up with a plan to put clampers on him.

They couldn’t, even if Kelly became briefly earthbound, firing three frees wide during a period when Limerick again threatened to run riot. They reeled off six points in as many minutes after the break, scoring with an ease which looked ominous for Clare. Then, Ryan Taylor struck back with a poacher’s goal in the 46th minute, hanging back on Cathal Malone’s dropping ball.

It was about the only high ball not swept up by either Declan Hannon or Dan Morrissey and Taylor made them pay. So after 50 minutes, Clare were right in it on the scoreboard, trailing by a single score. But it was a chimera. The burden on Kelly was intolerable and Limerick’s marauding half back division further reduced the options.

Shane O’Donnell was tightly marshalled all afternoon and Hannon, in particular, began to dominate his sector of the field. But it was the range and ease of Limerick’s firepower that eased them into the clearing. Mulcahy had completed the scoring of Limerick’s front six early in the first half and over the last 20 minutes of the game, they began to enjoy themselves.

Clare’s goal from nothing didn’t faze them: their 23rd point, a direct, sweeping transfer through the centre from Hannon through William O’Donoghue to Casey advertised the hopelessness of Clare’s cause. The champions had so many options, with Hegarty landing two sumptuous scores from deep on the left wing as they pulled clear of Clare. It took them just over an hour to tip 30 points.

Séamus Flanagan and Darragh O’Donovan made an entrance late on to remind all in Tipperary of their formidable strength in depth. The newly minted league champions will play the All-Ireland holders next Sunday in what promises to be a riveting day, despite the eerie backdrop of this October decider.