A goal in either half sees Tipp secure Division 3 status, Derry and Louth finish with wins 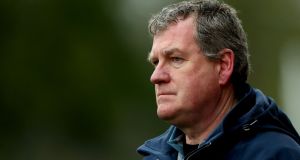 Terry Hyland’s were relegated into Division 4 after their defeat to Tipp. Photograph: James Crombie/Inpho

Leitrim’s hopes of survival in Division 3 were dashed by two Tipperary goals in either half of an entertaining game played in windy conditions at Carrick-on-Shannon.

The visitors had the best of the early exchanges but the sides were level at three points apiece in the 13th minute when Tipperary were gifted a goal.

Michael Quinlivan’s dragged shot across the Leitrim goal looked to be going wide when it fell to Kevin O’Halloran and the forward had the easy task of sliding the ball into the net from close in.

Despite this setback Leitrim busied themselves to get back into the game, scoring four unanswered points in the closing stages of the half to leave one point between the sides, 1-5 to 0-7.

Conor Dolan levelled matters with a point immediately on the resumption and Leitrim took the lead for the first time by the 45th minute with four unanswered points.

Then with five minutes of normal time remaining Tipperary struck again and a good move through the Leitrim defence ended with midfielder Liam Casey sending an unstoppable shot into the net. Leitrim did manage two further scores in time added on but Tipperary held out to secure their Division 3 status.

With promotion out of their reach, Derry still made their journey to Tullamore a worthwhile one as they made the long trip back up north with two points in the bag.

It wound up a satisfactory campaign for Derry who just missed out on promotion to Down under the head to head rule. While only two points separated the sides here, this was a game that Derry never looked like losing.

They led by 1-9 to 1-1 at half time after playing with the wind and that gave them an ample cushion to get home. The first half was a shockingly defensive affair with both sides drifting the bulk of their team back when they lost possession. Derry still broke forward at pace and wre 0-8 to 0-1 ahead when Aaron Leavy got a fine 31st minute goal for Offaly.

Derry replied instantly with a great goal from Ethan Doherty and they were in control at the break. Offaly improved considerably in the second half, thanks mainly to the introduction of Rhode duo Anton Sullivan and Niall McNamee into their attack. Sullivan got two points, McNamee five, four frees, but the result was always beyond Offaly’s reach - Eoin Carroll was sent off for a second yellow card 10 minutes from time but that wasn’t a major factor in the result.

Relegated Louth ended their Division 3 campaign in style with a seven-point victory over an experimental Down at Dowdallshill. Louth were determined not to finish the league with zero points and it showed.

Sam Mulroy was excellent in the devastating display, creating the opening goal for Ciarán Keenan, while landing 1-7 himself. The full forward is brimming in confidence since his club Naomh Mairtin won their maiden county title.

Down on the other hand were laboured in their efforts, only Kilcoo trio of Paul Devlin, Ryan Johnston and debutant Dylan Ward ever reaching the pitch of the game. They would combine for all but four of Down’s scores in the limp defeat.

Mulroy’s goal at the tail end of the first half, made it 2-7 to 0-9 at half time. The contest petered out before the second half water break after Conall McKeever sealed the game with Louth’s third goal amidst of a flux of substitutions from both camps.