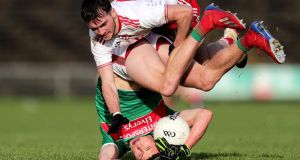 Action from Mayo and Tyrone’s league encounter in Castlebar on Sunday. Photograph: Inpho

Tyrone ended Mayo’s great love affair with Division 1 football in the most dramatic of fashion in a battle for survival at MacHale Park, Castlebar on Sunday.

After a pulsating encounter which produced four quality goals, three from the visitors, it will be Mayo’s first time to be demoted after 23 years in the top flight. While the win secures Tyrone’s Division 1 status for another year and on the balance of things, deservedly so.

Despite playing in their own back yard Mayo were never allowed the freedom they were afforded in Tuam last week where they mowed down Galway to put their destiny in their own hands on the final day of the 2020 league.

However by half-time James Horan’s young team, who went into battle without Cillian O’Connor, looked to be in deep trouble when they trailed by eight points (2-9 to 0-7).

Both Tyrone goals were top quality, the first coming on 20 minutes almost immediately after the water break. Former AFL player Conor McKenna, who had a major influence on this result, scored the first while young Darragh Canavan bagged the second.

The son of former All-Ireland winning Tyrone captain, Peter, he finished excellently after being picked out with a 50-yard pass from McKenna. And it too came at an important stage of the match, arriving just before half-time.

Paddy Durcan got Mayo up and running after four minutes but it was soon level at 0-4 apiece with the two teams going score for score in an entertaining opening period.

However, the stress signals were coming from Mayo’s defence as Tyrone, who had goalkeeper Niall Morgan operating almost as a sweeper, used the long ball with the aid of a very strong wind to great effect.

Mayo were held scoreless during a 15 minute period in which they coughed up 1-3, leading to the eight point half time deficit.

It took Mayo less than six minutes of the second half to pull that eight point deficit back to five though, Darren Coen with back-to-back points and Matthew Ruane with a 50-yarder with the wind now at his back.

Darren McCurry, who had a superb game for Tyrone, put a halt to that Mayo momentum with a vital point but the score which was to ultimately decide this game came when a poor kickout from Mayo goalkeeper David Clarke was intercepted by Conor McKenna, and despite losing his footing and the ball, he still found time to recover and beat Clarke from close range.

Mayo had shaved off three more points to cut the deficit to six when Tommy ‘goals’ Conroy from the Neale club lived up to his reputation of finding the net on a regular basis. He produced a cracking finish 13 minutes from time before Tyrone lost Conor Meyler to the the sin bin. When substitute James Durcan nailed back-to-back frees, it was suddenly a one-point game.