Memorable Croke Park day when the Faithful stood their ground 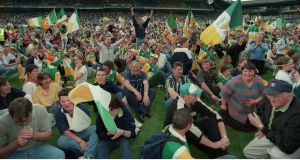 Even from the relatively safe country of 20 years passed, 1998 has lost nothing of its mad, vivid shine.

It was the apotheosis of hurling’s dreamland summers, when the old game shook off the orthodoxy to become wildly democratic; a championship up for grabs, it seemed then, for any hurling county bold enough to grab the glory.

In the weeks between the Clare-Waterford Munster final drawn game and replay and the Offaly-Clare All-Ireland semi-final saga, the hurling championship season became at once riveting and ungovernable; an electric cable of emotion and uncontainable pride of place.

Clare’s progress through the ’98 championship became such a crusade against perceived slights and prejudices that nobody paid all that much attention to the sudden arrival of Michael Bond as the new manager of Offaly after the Leinster final.

Their 3-10 to 1-11 defeat to Kilkenny in the Leinster final had prompted manager Michael ‘Babs’ Keating, never one to shy from a blunt assessment, to famously describe his charges as “running around like sheep in a heap”.

When Johnny Pilkington took a phone call from journalist Liam Horan on Monday morning asking for a response, he didn’t hold back. By Tuesday, Babs was gone.

His replacement Michael Bond remains one of the great inter-county enigmas; he swept in from nowhere, guided a lost team to an All-Ireland and after a couple of seasons he happily disappeared again into the Galway heartland.

“It was through a friend of a friend,” Bond says now of being parachuted into the Offaly post. “There was no kind of hidden agenda. To me, Babs was the greatest hurler ever I saw playing. I had stopped training teams in 1986 when I became a school principal. But this was the middle of the summer and I was free. I also don’t like players getting unnecessary stick in the press. I’d row in behind the underdog.

“And I always liked Offaly’s style of hurling. Not every team would respond to my type of training. But I knew that quick, fast ground hurling and getting the ball to the inside line as fast as possible would work for them. When Galway did that under Micheál Donoghue last year, they were a different team. You were taking over 30 guys who were very, very skilful.”

They were that. Bond stood in the obscurity of the stand in Tullamore on a wet, baleful Monday evening and watched as Paudge Mulhare put Offaly through their paces.

“I had permission from the county board to watch them. And I walked away afterwards.”

The next evening, he turned up in the Offaly dressing room, known by precisely nobody and briskly announced himself.

“I think it was just that confidence that Michael had that made the difference. It was straightforward enough training in terms of drills. But it was in summertime and the ball would speed up. And after about two weeks of Michael coming in, there was a confidence there. He had this enthusiasm and he didn’t constrain us or tell players like Brian Whelahan or John Troy what to do.”

That was the genius of Bond. His approach was at once school-masterly and liberal. He shocked Martin Hanamy by ordering him to do 20 press-ups when he landed late at a first session but behind the discipline, Bond was all about helping the Offaly players tap into was a superbly rich if inconsistent vein of talent.

“Babs and [trainer]Johnny Murray had done serious work. Birr were All-Ireland club champions that year. And we trained phenomenally. Kevin Fennelly [the Kilkenny manager] – I thank him to this day for allowing me to play a challenge game after the Antrim game [the All-Ireland quarter final] – and they destroyed us. I remember Martin Hanamy saying after that game: at the rate you are going you will kill us.

“Just because of the training. We used to train for two hours and 20 minutes but that was stick work, ball work and game. But it is very easy, when you have a group of players ridiculed in their own county and in the press, to motivate them. They played the game for the love of the game. And we had a lot of luck, too.”

The luck started with the fact that they were still in the All-Ireland; it was just the second year of the back-door improvisation, a change against which Offaly were the most vociferous objectors.

But by the time they played Clare on August 9th, they were focused and purring. Pilkington led the scoring with 1-1 with seven different Offaly men contributing to the 1-13 total they shared with Clare. For large parts of the game, they had looked the better team.

The replay, fixed for Saturday, August 22nd, was a different story. The Offaly team bus became mired in match traffic. There was a minute’s silence for the Omagh bombing victims, an atrocity which left a permanent cloud over the summer. Loughnane had Clare locked on and they stormed into a 10-point lead at half time. Offaly’s summer looked set to end that afternoon. But there was no major panic in the dressing room.

“You probably don’t believe you are going to get back this 10-point lead,” says Pilkington. “But what you do is you just keep chipping away and take your points. And all of a sudden there are six, seven points in it. Billy Dooley scrambled a goal or whatever and now all of a sudden there are only five or six points. Then we get a second goal and now you are in shouting distance with a good five minutes left to go.”

Perhaps the most remarkable aspect of Jimmy Cooney’s mistake – the Galway referee blew full-time three minutes before normal time had elapsed – was that it hadn’t happened before then.

GAA referees are alone in the extent of their multi-tasking: lone officials on a big field also required to score-keep, book-keep and time keep. When Cooney ended the semi-final early, there was confusion, pandemonium and, finally, protest.

The referee was himself ushered off the field by a coterie of security men before he himself had time to fully process what was happening. Hurlers from Kildare and Kerry, scheduled to play an Under 21-B final, quickly took the field to warm up.

Eventually, Offaly supporters also took to the field in their hundreds and engaged in a protest that was inimically of the Faithful County in its laid-back nature; they sat down in the sun.

Bond was, as it happened, a neighbour of Cooney’s and during the intense media enquiries afterwards was careful not to blame the official in any way. In the Clare dressing room, Ger Loughnane was sympathetic to Offaly’s plight but understandably convinced that the day was done.

“We’re incredulous really. Everybody just looked around. We thought he’d blown for a free.”

Across the corridor, Michael Duignan, who would later share RTÉ Sunday Game chit-chats with Loughnane, was quick to voice the Clare manager’s recent entreaties about “inhumanity and fairness for all men”, voiced in the wake of the three-month suspension served to midfielder Colin Lynch after the Munster final.

Where, Offaly wondered, was the fairness in all this? Within a matter of hours, it was clear the GAA was considering a replay. An impromptu Saturday evening meeting in the Offaly camp led to a heated debate as to whether they should train on Sunday – just in case.

“It was one of those things, everyone had three or four drinks and it blew up,” says Pilkington. “But once we heard Sunday morning that the match was going ahead, 95 per cent of the players turned up for training. And psychologically we felt we had an edge because the one half we didn’t play was the first half of that replay.”

What Pilkington and Bond remember now is the instant graciousness of the Clare team after that victory in the third game. “No sourness at all.”

In the All-Ireland final, against all odds, Offaly weren’t for blinking. Brian Whelahan showed up “white as a ghost” on the weekend of that final but even his illness was transformed into a kind of bonus when Bond sent him into the forward line.

“He was up all night, he was on medication, he had a terrible flu and Brian McEvoy had already scored a couple of points on him,” Bond reasons. “So it was a matter of taking him off, which would have been unheard of – or moving him up. What did he score? 1-5 or something like that?”

Current Offaly manager Kevin Martin played wing-back for that day. Twenty years on, expectations in the country are more muted after a succession of rough seasons.

“I would be cautious,” Pilkington says. “Kevin is definitely going the right way about things and brings his style and attitude to the players as well and what he expects; work rate and structure, which is what he had as a player. People got carried away after the first round game against Dublin. There is a hope around more than confidence.”

The sauntering ’98 vintage Offaly possessed confidence in abundance. They were delighted with that All-Ireland but didn’t get carried away.

“Sure within a few weeks you’re back with the club coming up against Duignan or Troy,” Pilkington shrugs. “Life goes on.”

That November, across the border in Kilkenny, Brian Cody quietly succeeded Kevin Fennelly as senior manager. The neighbours would meet once more in the 2000 All-Ireland final, when the result was reversed. After that, the road diverged.